In their final year, Amna, Osama and Anand were faced with the dilemma all final year students face: what do we do? What they did know for sure was that they wanted to build something that would be of actual use to people. Considering the fact that Medical projects have a lot of scope, they met with Amna’s father – a Urologist. He showed them a Lithotripter, a device used to perform a minimally invasive urinary stone removal procedure. Upon doing some research they found out that Lithotripters are not manufactured locally and doctors have to pay from Rs. 10 Million to upto Rs. 40 Million to import them. That is when it hit them: why hadn’t anyone thought of designing it in Pakistan before?

These three dedicated individuals spent the summer of 2014 doing research on their project. Their findings included harrowing facts: 1/7 people are effected by urinary stones in Pakistan with a recurrence rate of 75%. Most of the doctors used the open surgery method because it is less expensive. People who did opt for the minimally invasive procedure had to pay large sums for it. So by the end they were clearer than ever that they wanted to build a locally designed and manufactured product for urinary stone removal.

By January 2015, they had built a major portion of their prototype. What came next was the difficult part. The design of the wires took them around four months to get right. Over this period they also had to get their product ISO 9001 Certified and pass the EMC Testing. Once that was done they performed a test run with their prototype in May, 2015 and passed with a 100% success rate.

But they didn’t stop there. Since graduation, they have been striving to make their own supply chain that would help them keep up with the demand once their product, called Lithomatic, comes in market. In its entirety, it includes a Control Unit, a Handheld Device, an Integrated Desktop System and a Processor. Lithomatic is set apart from the other similar devices because it offers a stone tracking feature and a separate imaging system to assist doctors in performing their procedures.

The team has won 8 local and 1 international competition, including Plan9 Islamabad 2014, FICS 2015 and PIEAS National Entrepreneurship Competition. What’s more impressive is that in their one year journey they chose not to incubate or accept any investments. They bootstrapped and developed Lithomatic themselves or used their impressive prize money.

These three are perfect role models for people looking forward to be entrepreneurs – the road will be difficult but your drive should come from your intent to solve real-world problems. 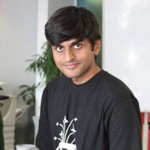