Before these four individuals received a gold medal for their research project, they spent time in university studying complex courses hoping one day to actually implement that knowledge. Their break came when one day a teacher suggested they do a project on prosthetic legs. What further inspired them to take on the project was Hugh Herr’s Ted Talk. Herr, a double amputee, designed prosthetic feet using specialized prostheses that he designed himself. His creation allowed him to re-commit to his passion for rock-climbing.

They set to work with Herr’s design as a benchmark. During their research process they found out that there are a shockingly large number of amputees in Pakistan. While doing some on-ground research, they also found out that most lower-leg amputees are given a “passive foot” – a cheaper alternate, usually made of wood that they have to drag along. An “active foot” is commercially available in Pakistan for Rs. 30 Million.

They worked with highly qualified supervisors from NUST’s College of EME and School of Mechanical & Manufacturing Engineering. The prosthetic foot they designed works using Artificial Intelligence: their AI algorithms predict the foot’s movement based on the EMG signals received from the leg’s muscles. So basically once a person puts it on, he can walk with it in perfect coherence.

In November, they represented Pakistan at the Asia Pacific ICT Awards (APICTA), 2015 held in Colombo where they also presented their research project titled “Active and Intelligent Powered Ankle Foot Prosthesis for Trans-tibial Amputees”. Their work was so exceptional that they ended up winning up a Gold Medal with their last minute entry.

Their project is still in the prototype phase, but whenever it is released, it’ll be directly implementable and could make a real difference in the lives of millions of amputees in our country.

Noor, Farjad, Usman, Umar represent some of Pakistan’s brilliant minds. With their undisputed competence and passion, they are destined to achieve great things. 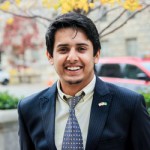