Someone said that, “Music is my escape!” and I can completely relate to that.

I am sitting with the ambitious co-founders of Pakistan’s first music streaming website Patari.pk and I can feel the energy level very high. Khalid Bajwa, Co-founder of Patari, is explaining his product to me and once in a while thumps his fist on the table. His tone is high, I know he’ll need water in 5 minutes and I am wondering why the drinks are still not here.

Patari is currently incubated at Plan9 (Pakistan’s largest technology incubator). It is a music streaming website just like the international music streaming service spotify. The service currently boasts a database of more than 15,000 songs; the biggest ever available online, which includes both mainstream music and Lollywood songs. I was surprised and I inquired, are we really churning this much number of music that it required a service for Pakistan? Khalid said yes, there are a lot of underground bands producing cover music in the country and of very great quality. Moreover, he added that music doesn’t work like movies which you see one time and then, you are done with them; people listen to the same playlists for months. A fact that shouldn’t be ignored is that in the recent years, Pakistan’s music industry has boiled down to Coke Studio and Nescafe Basement, new music is not being produced here at a high rate.

Patari has recently opened beta invites and they are getting massive interests from general public, a testament that if a product is built well and it solves a problem, people will use it for sure. I went through the playlists and checked out the beta version and I was pleasantly surprised — some really neat work was being done there. Of course, there are a few glitches here and there but since it’s a beta version, we can ignore them in hope that they will be removed in the stable release.

Patari team is not worried about the business model yet, they are focussing on growth and user acquisition at the moment. The famous singer, Haroon, is the founder of another music portal in Pakistan called Taazi. Although, the business model and functionality of it is totally different but since Haroon is in the circle of musicians and the whole music industry knows him, he might change the direction of this product.

Another problem Patari might face going forward will be the business model. Dhingana, a popular music streaming service in India, was shut down in just one year and two months. The growth was ecstatic but, unfortunately, the team couldn’t identify the right business model and lost a couple of contracts which were very important for survival. An issue that lies here in Pakistan is piracy — People don’t buy music they prefer illegal downloads. Patari will have to first create an ecosystem of it’s own and then move the people from freemium to paying model, which can be an uphill task.

Saavn also recently streamed all the latest episodes of Coke Studio which means that Saavn is also interested in Pakistani music and they might want to expand across the border — Patari Team is not worried about that. The team believes that Patari is a desi product and no matter what happens Pakistanis will prefer Patari over any outsider for local music. Khalid added that Saavn is popular in India because of Indian music, likewise, Patari will be popular here because of it’s niche. In the upcoming months, the team will be rolling out recommended playlists, songs, and artists as well. While talking about role of Plan9, the team said that they are in the circle of right  people, the kind of support and help Plan9 has given them, it wouldn’t have been received from anywhere else. The team is in contact with some potential investors and organizations for collaborations, all due to the help of the incubator.

As an avid music listener, I am really happy that we finally have a huge database of Pakistani music at one place amidst all those ad-stricken ugly and spammy websites. But, on the other hand, I can see that Patari team will have to work really hard to fight against piracy & ‘mufta culture’. And to top it all, include payment gateway and growth of the music industry as well. 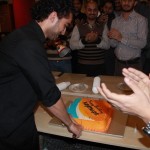