Indian hackers have taken down University of Swabi’s official website

Indian hackers going by the name of “ICREW Hackers”, led by “H45H_C47”, have hacked the website of the University of Swabi. According to the current version of the website, the hackers have done this as revenge from Pakistani hackers for taking down multiple Indian sites.

How the hack was achieved is still unknown but as of right now the website is still in the hands of the hackers. This hack could be the second highest-profile attack on a Pakistani institution, the first one being the Russian’ hacker’s attack on PIA and they put the PIA network and database up for sale on the dark web.

The hackers have their own YouTube page as well as a Facebook page that they have given the link to after hacking the website. Their Facebook page claims that they are part of the Indian Cyber Research and Empower Wing. The organization was formed in 2018 according to the page.

The group has also claimed the responsibility for hacking multiple Pakistan sites before including many government websites as well after the Pulwama attack. According to a Nepali newspaper, the group also hacked the website of the Civil Aviation Authority of Nepal in May 2020. 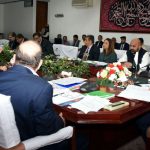