Moto E vs. Moto G: Which One Should I Buy? 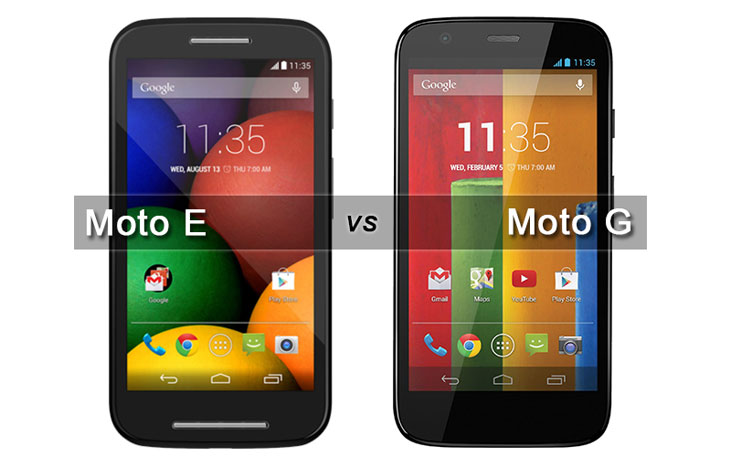 In the times where every other manufacturer is looking to pack the most powerful hardware inside their flagships, Motorola has been working on a different path: work from the ground-up and offer low-price smartphones for the masses with purest form of Android OS there is besides stock. Moto G was a critically acclaimed unit of this budget market-centric strategy, and Motorola promises to continue down the same path with Moto E —another low-priced Android smartphone that aims to disrupt the smartphone pricing plans of its competitors.

Moto G is widely considered to be a moderately-spec’d and rightly-priced entry-level smartphone. Since Moto E’s original price-tag is even more modest as compared to that of Moto G’s by $50, you’d naturally expect that there’d be plenty of compromises inside and out. Spoiler alert: There sure are, and plenty of them at that, but not all is bad news.

On the outside, neither of the Moto’s in question are slim, or particularly light for their display-size. At 12.3 mm thick and 142 grams heavy, Moto E compares with 11.6 mm thick and 143-gram heavy Moto G on about the same scale. The devices are sturdily-built with Corning Gorilla Glass 3 protection on the front and user-changeable back-panels with the signature curve that has become synonymous with Motorola’s new smartphone design language.

Moto E boasts a 4.3” display with 540×960 pixels resolution, making the pixel density ~256 ppi. Moto G, on the other hand, features a 4.5” IPS display, which is HD with a resolution of 1280×720 pixels. The difference between the two is clearly visible as Moto G’s display is sharper and less “pixelated”. 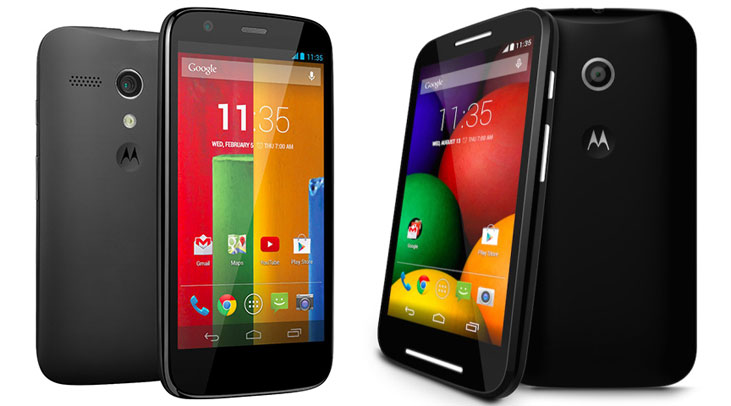 Moto E packs a Qualcomm Snapdragon 200 chipset running dual-core 1.2 GHz Cortex-A7 processor alongside Adreno 302 GPU and 1GB of RAM. Moto G runs on Qualcomm Snapdragon 400 chipset with quad-core 1.2 GHz processor, Adreno 305 GPU and 1GB RAM. Processing power on both smartphones is adequate to get anything done like viewing webpages and playing regular games, but Moto G’s performance is slightly smoother, thanks to its beefier processor.

Moto G has a 1.3 MP front-facing and 5 MP rear-facing camera with LED flash. Moto E has 5 MP primary camera only, and it doesn’t have LED flash either. Both primary cameras are capable of 2592 х 1944 px. still images. While Moto G can shoot 720p videos, Moto E is only capable of 480p videos at 30fps. Rest of the features like touch-focus and geo-tagging also come with the package. Don’t expect the image quality from either of these pones to be spectacular—they’ll only perform decently in well-lit conditions.

The battery capacity of Moto G is 2070 mAh and for Moto E it is 1980 mAh. With this much battery power, the devices are claimed to last at least 24 hours with mixed usage. The batteries on both devices are not user-removable, though the back panels are, which come in plenty of color choices. 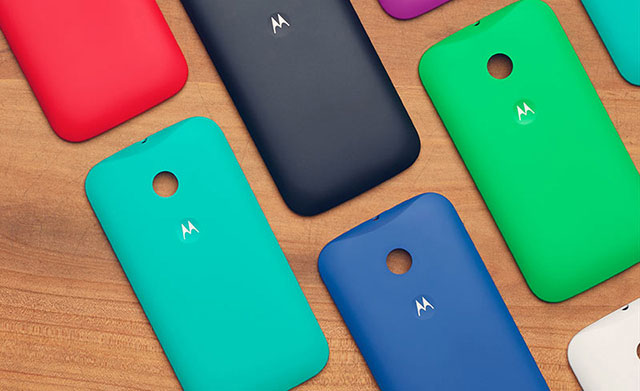 Moto G and Moto E both support 2G and 3G connectivity, and come with optional dual-SIM versions. Motorola also has a 4G LTE-enabled Moto G model in the pipeline and it will be released in the upcoming weeks. This 4G LTE version will also have expandable storage alongside standard 8GB internal memory. For the 3G versions without expandable storage, Moto G offers 8 GB and 16 GB models while Moto E offers a measly 4 GB built-in memory.

Software is one undisputable domain where Motorola’s latest offerings excel without doubt. Moto G runs Android Jelly Bean v4.3 out of the box, and is immediately upgradable to KitKat v4.4, an upgrade that was promised at its launch event. Moto E runs KitKat v4.4 by default and is guaranteed to receive at least one OTA update in the future.
[Image: https://quip.com/-/blob/qjmukik4EFexHy3NFnXk8w] Moto G and E both run Android that is closest to the pure, stock version one can find on Nexus devices. This is one of the major strengths of these budget Moto devices over other low-price, local competitors like QMobile or Voice since the software experience they offer is lacking in many categories. 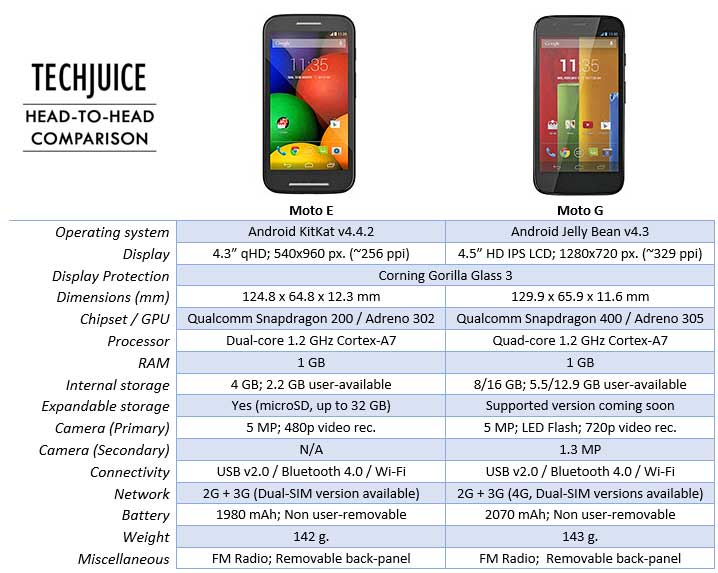 With both Moto G and Moto E, Motorola has found the middle-ground with decently-powered smartphone device without sacrificing performance or going beyond a specific price-point.

Since Motorola doesn’t release smartphones in Pakistan officially, you can expect the prices of both Moto G and Moto E to be slightly higher than their original price tags. Moto G, for example, can be purchased for around PKR 20,000 from online retailers in Pakistan like HomeShopping and Symbios, against the standard $179 tag. Moto E might also be available for around PKR 16,000 once it is available and the prices have settled. Then, it is only a matter of your available budget and the purchase purpose. If you can fork out some extra cash (hopefully only a couple of thousands), get Moto G by all means, as the improvements of Moto G over Moto E seal the deal for sure. 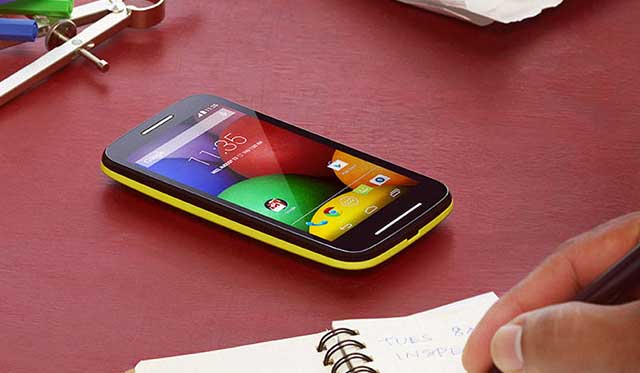 You might as well want to wait for the 4G LTE version of Moto G which offers both 4G connectivity and expandable storage to boot. But it will cost a little more, along the lines of PKR 25,500 or more.

If you are extremely tight on budget, or only want a secondary smartphone which will generally be used for simpler tasks like calling, texting, media (most probably audio) storage and playback, and browsing the web, Moto E is definitely the way to go. There are plenty of compromises here, as explained above, but that doesn’t mean it is an incapable phone. Moto E knows both its limitations and strengths, and so will you after spending some time with the device to better utilize it.
–Images courtesy: Android VIP Club, TheNextWeb, Motorola 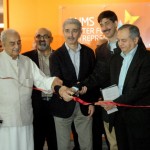