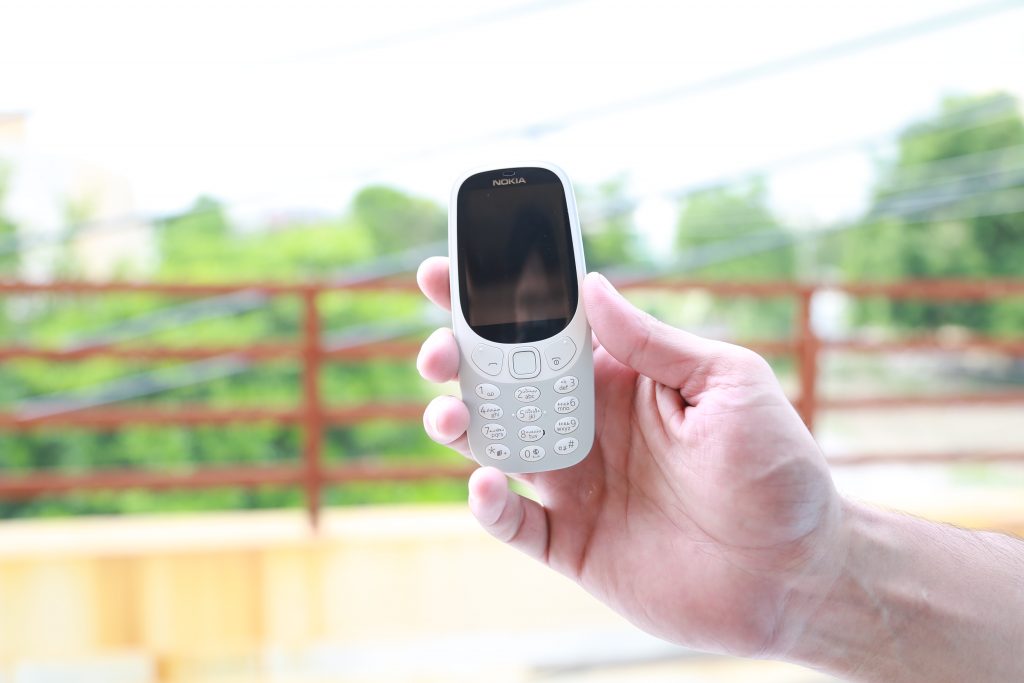 Nokia 3310 is probably the most iconic phone of all time. Unless you’ve been living under a rock for the last 20 years, there is a slim chance that you haven’t heard about the phone that gave birth to Nokia‘s reputation for non-destructive phones and the insanely popular snake game. Nokia 3310 has become one of the best-selling smartphones of all time and has sold more than 126 million units worldwide.

With the purchase of Nokia’s brand and operations by HMD global, the Finnish company hopes to make a comeback in the now-crowded phone market. To do so, Nokia has gone back to its roots and thought it was time to give 3310 a small makeover and release it for people who want a similar phone in the year 2017. Does the new release of Nokia 3310 do justice to its predecessor? Let’s take a look at this together in this review of Nokia 3310 2017.

Before going further with the review, here’s a short video review of the device:

No one expects Nokia 3310 to be a spec monster, but it still does provide users will nearly all the basic necessities of a modern phone (with the exception of 3G/4G cellular network). 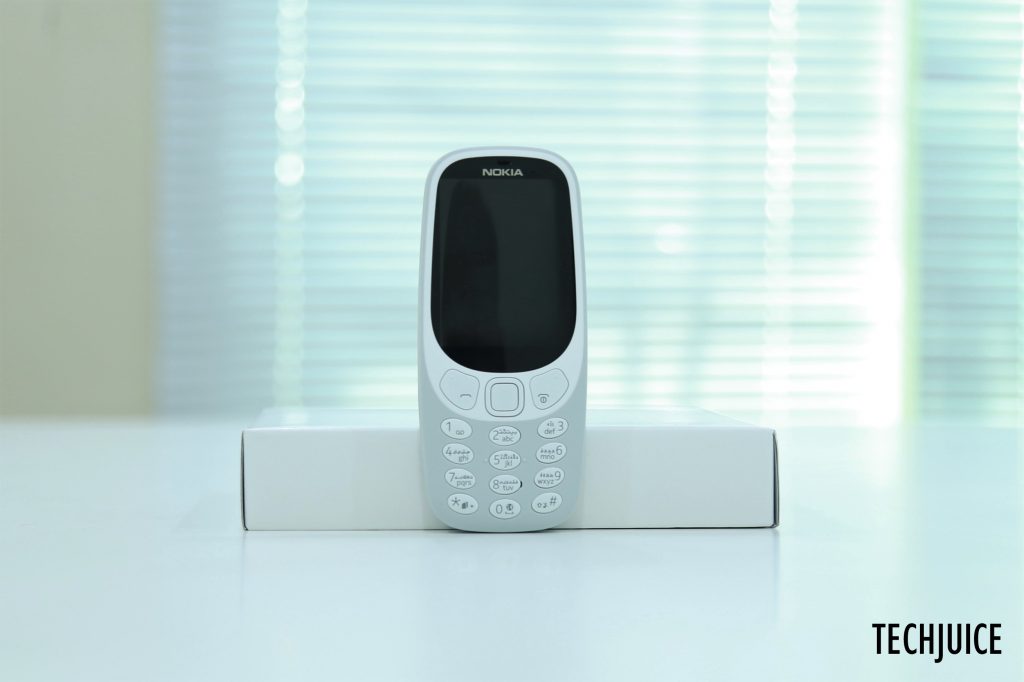 Keeping in view the price of this device (6,500 PKR), it’s not fair to expect a lot to be provided with the device. However, continuing the good out-of-the-box experience of old Nokia, this device also comes with all the accessories required to get the customer up and running without any fuss. Here’s what you should expect to see in the box after opening it:

It’s not an extensive list but it’s mainly on par with what other manufacturers provide with smartphones these days. 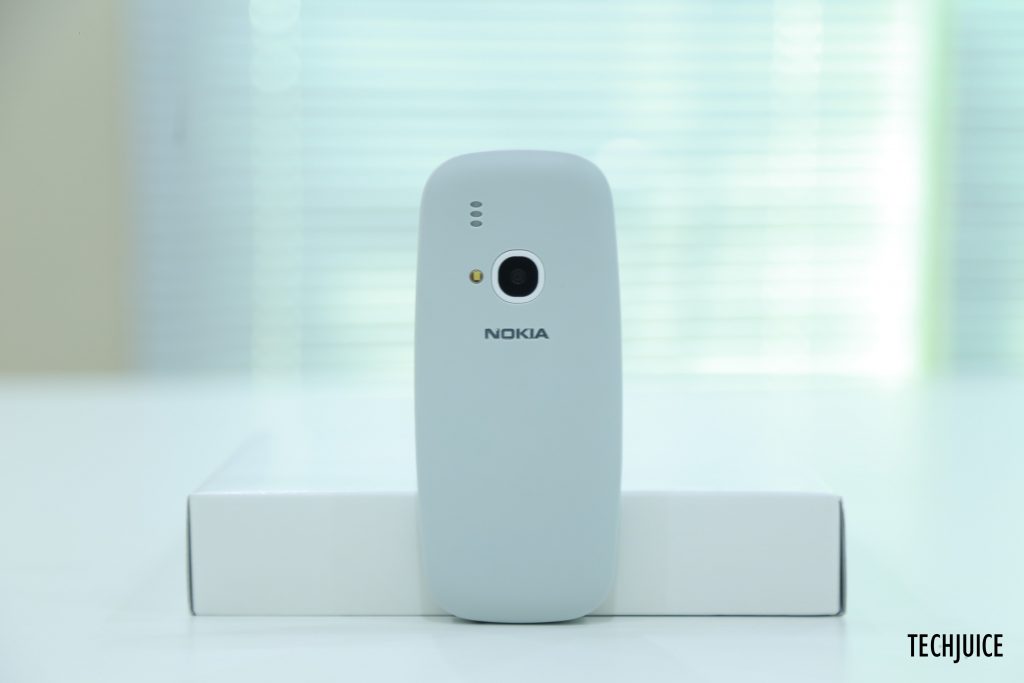 Nokia 3310 2017 comes in a different, yet somewhat familiar shape. It resembles the original device in many ways but makes sure to tweak the design in a way that it is easily distinguishable from its older sibling. Compared to the original, the design is a bit more rounded on the edges and around the buttons to give it a more modern look. The single selection button on the original device has also been replaced with a 4 way D-pad to provide a much needed navigational upgrade.

The 2017 model is also significantly lighter than the original device and weighs only 79.6 grams. Those rounded edges and the light weights translate into an amazing in-hand experience. After using smartphones with screens larger than 5 inches and weights in excess of 150 grams, this device feels like a feather in the hand. It is very easy to fit in any pocket and it fits there snugly without announcing its presence in any way.

Because the newer 3310 has been built with the lighter material it does not feel as strong or robust as the original. Nokia 3310 of the old could take any amount of beating and would still work as if it was new. The newer model, although isn’t built like a tank like the original, is still pretty solid and would fare better than most new phones when taking a fall or bracing some impact.

Nokia 3310 2017 has a 2.4 inch QVGA (240×320 pixels) TFT screen. It is what many Nokia feature phones offer and provides a similar experience. The screen is definitely not sharp and pixels are easily visible when watching any video or picture, but that’s not what the device is meant for. Text is crisp and there is no issue in discerning the text messages on this phone. So the display does what it’s meant to do well.

Let’s be honest here, this phone is not going to win any sort of specifications battle with other high-end phones in the market. It’s running some unknown processor with unknown amount of RAM and has only 8 MB of internal storage. So there’s no point in talking about the software and the hardware separately. What matters while using this phone is the actual user experience. How well does this phone do the job it is commissioned to do? Pretty well actually. It is running the Series 30 plus software designed by Mediatek and includes a number of handy built in apps. It handles all the basic functions of a phone like texting and calling with ease. The software is easy to use and performs well on the limited hardware of the device.

In addition to basic texting and calling features, Nokia 3310 2017 also includes an updated and enhanced version of Snake. The snake does a whole lot more now, all of that in color. There are multiple stages and different modes. Although the game is still fun to play, I’d still prefer the simpler and more addictive version which debuted with the original 3310.

Can you imagine using a 2 MP fixed focus camera in today’s smartphones? Sounds preposterous, right? Well most people would have been amazed by the inclusion of this camera on the older version of Nokia 3310. The 2 MP fixed focus camera on the back of the new 3310 is definitely an improvement over the lack of camera in its older sibling. Although not a lot can be expected from this fixed focus shooter, but it still works surprisingly well for what it’s worth. The camera software is pretty decent and allows capturing video as well. It also offers a few effects which can be applied to the captured photos.

The original 3310 came with a 900 mAh battery and it offered astounding battery life. The new Nokia 3310, keeping in view the increased power consumption due to slightly better hardware and screen, bumps up the battery to 1,200 mAh. This increase in capacity means that despite offering a better screen and more rich user experience, the battery life is still going to be amazing. It offers over 22 hours of talk time and nearly 30 days of standby time. Similar to the older version, you can charge this one once and forget about the battery issues of at least 2-3 days.

At the time of writing, Nokia 3310 2017 is available for 6,500 PKR in the market. Some people might think that for this amount they can easily get a used smartphone which will provide much more features over this feature phone. So what’s the purpose of this device? For what type of customer is this device meant for?

This phone definitely isn’t for people looking to invest their money in high-end mobiles. But if you are looking for a phone to use it for texting and calling purposes only, this is the device for you. If you want extraordinarily long battery life from your device, this might be the device for you. But the most important segment of customers that this device is targeting are the nostalgic customers. Nokia 3310 was an iconic phone and many people, myself included, wish to own a phone like that again. For those customers, this price is a small one to pay. 6,500 PKR might be a bit much of a price to pay for a feature phone with no 3G/4G option and 8 MB of internal storage, but being a successor of the beloved 3310 makes the price seem justifiable. 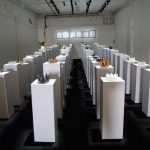