Being sandwiched between hostile neighbors, Pakistan has been bolstering its defense capabilities for the maintenance of state sovereignty and territorial integrity. Military modernization coupled with a desire to develop effective deterrence is set to drive Pakistan’s defense-bought budget at a compound annual growth rate (CAGR) of 5.2% from $10.2 billion in 2023 to $12.5 billion in 2027, forecast GlobalData, a data, and analytics company.

Ruble Sharma, GlobalData’s aerospace and defense analyst, comments: “The volatile nature of the current domestic, regional and international environment has exacerbated Pakistan’s security challenges. Despite mounting debt and economic uncertainty, Pakistan has approved ambitious military modernization programs to procure military equipment to build its capabilities and is expected to continue to do so over the forecast  period.” GlobalData’s latest report, “Pakistan Defense Market Size and Trends, Budgets Allocation, Regulations, Key Acquisitions, Competitive Landscape and Forecast, 2022-2027”, reveals that Pakistan’s Defence expenditure for 2022 would amount to $9.5 billion, a 4.7% increase on 2021, and reflects a CAGR of 5.2% during 2023-2027.

To boost Pakistan’s defense capabilities, China has delivered the latest versions of its J-10 multirole tactical fighter aircraft. Pakistan also plans to induct the block III variant of the JF-17 fighter in the future. Additionally, the ongoing program for eight Type-041 submarines is planned for delivery in 2022–2028, including four to be produced under license in Pakistan. Many other programs for the acquisition of artillery and military drones have been ongoing or are planned for the coming years.

Sharma continues: “Pakistan has been leaning on China to procure multiple military pieces of equipment. The J-10 will strengthen its conventional deterrence posture, by replacing some of Pakistan Air Force’s aging fleet of Mirage III ROSE fighters and could potentially play a role in low-level maritime strike operations. They are expected to address the asymmetries in the region, enhancing the conventional capabilities of Pakistan.”

Additionally, after a hiatus of four years, the Biden administration has approved a $450 million F-16 fighter jet fleet sustainment program for Pakistan. The US Defence Security Cooperation Agency (DSCA) notified that the planned transaction does not involve any new capabilities, weapons, or munitions. Sharma concludes, “The US DSCA’s decision to allow Pakistan Air Force F-16 operation helps Pakistan deal with an aging fleet and tight finances that are hampering direct procurement and large-scale modernization programs. If the country continues to face financial difficulties compounded by environmental disasters, it will find itself in a difficult position to modernize or maintain its fleet, and the deterioration of the country’s security apparatus could lead to further security challenges in the region.”

Read More:Pakistan Has Received the Second Batch Of J-10C Fighterjet From China 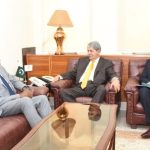