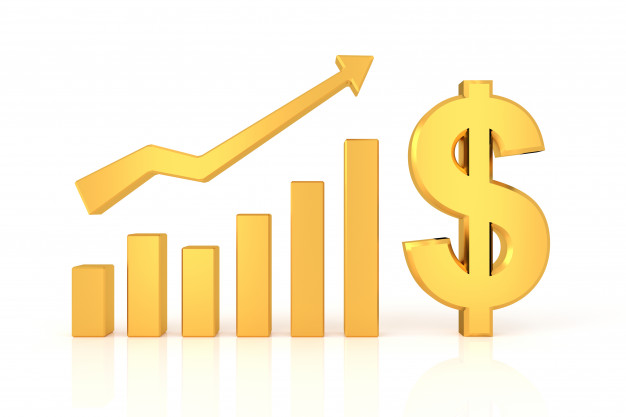 The flow of workers’ remittances into Pakistan continued its record run of going above $2 billion for the 10th consecutive month in March, State Bank announced in a tweet. At $2.7 billion, they exhibited growth of 20% compared to February & 43% compared to March 20, and the country could be on track to reach an all-time high in remittances in 2021. Cumulatively, the remittances have risen to $ 21.5 billion during July-Mar FY21, contrary to the World Bank’s forecast of a sharp decline in global remittances as well as its own expectation that the pandemic would keep remittances flat, up by 26% over the same period last year. 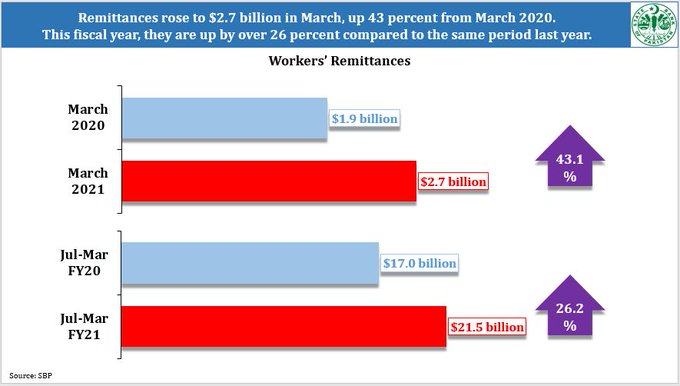 In February, the country received remittances worth $2.26 billion, which was 24% higher than $1.82 billion in the same month of the previous year. Cumulatively, in the first eight months (July-February) of the current fiscal year, the remittances grew 24% to $18.74 billion compared to $15.10 billion in the same period of last year.

If the current trends continue, “Remittances for the full fiscal year 2020-21 will be close to $28 billion,” according to the reports. Remittances from UK, Europe, Saudi Arabia, UAE, and other GCC countries comprise the major chunk of the total revenue received from the overseas Pakistanis, with Saudi Arabia taking the lead. 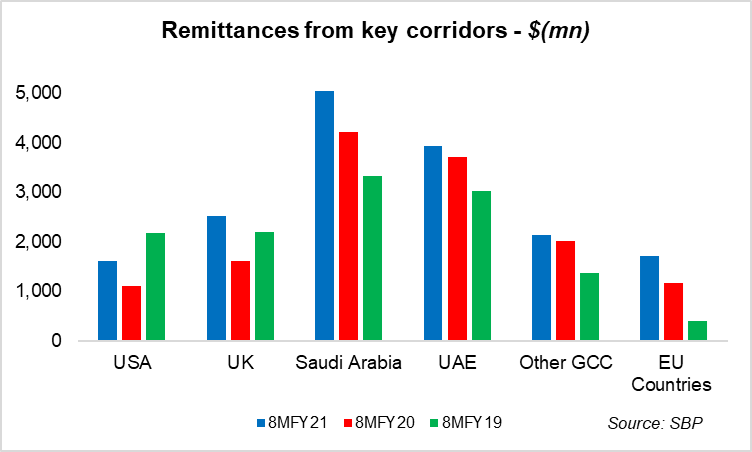 Previously, PM Imran Khan took to Twitter to thank the overseas Pakistanis for “8th consecutive month of remittances above $2b”.

One major factor driving remittance growth in the country has been the pandemic-hit travel restrictions which have made the overseas residents send in more money back home due to reduced travel expenses. The stoppage of the illegal hawala-hundi system of sending remittances back to the country from abroad amid partial suspension of international flights during the ongoing Covid-19 pandemic is also a driving factor behind the skyrocketing remittances.