Biggest Keynote event since the iPhone: All about the iPhone 6, ApplePay and AppleWatch 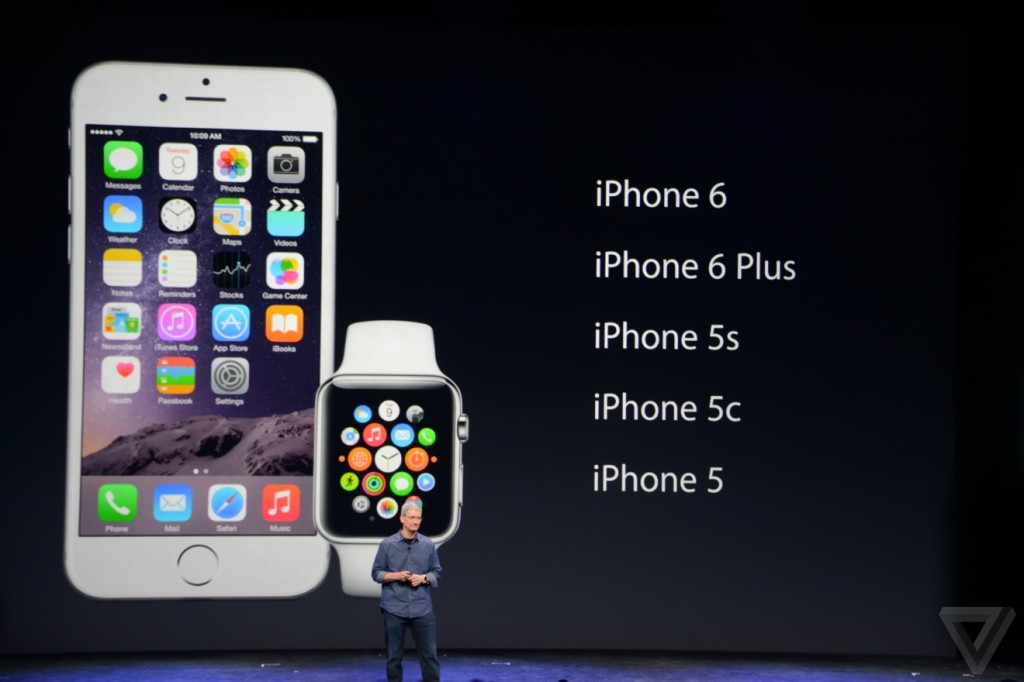 The Apple Keynote on 9th September 2014 at the Flint Centre could possibly be the biggest thing to happen to the mammoth tech-leader and source of adoration for everyone since their announcement of the iPhone in 2007. Fast forward seven years, Apple has now once again dropped the jaws of the audience (and the online live-streamers) with not only the announcement of two market-leading, super-grade iPhones (that we have grown to expect) but also of a mobile-wallet system that seems to be the most promising for all yet pitched and, finally, of Apple’s take on the wearable computing department – the much anticipated AppleWatch. In the spirit of their announcement, we will discuss each of these in same order as they were unveiled:

The categories of iPhones include the 6 and the 6 Plus, and while the former boasts a decent 4.7” inch screen that it a commendable improvement to the Apple standard in itself but also a phablet entry with the iPhone 6 Plus. With an A8 core, Retina HD display, a completely overhauled camera, a manner of design which makes the iPhone 6 a mere 6.9mm at it’s thickest point (whereas the larger 6 Plus peaks out at 7.1mm) and the freshly-developed M8 motion detector chip built it both phones seem to delivering upon the exact calling of the market. Let’s talk about the big features individually:

Beginning with the most obvious manifestation of the lately evolved bigger-is-better theory currently running the mobile computation industry, we see that Apple has finally decided to move on from it’s minute improvement (from 3.5” to 4”) when it launched the iPhone 5. The new iPhones not only boast screens with sizes to match the Nexus, the Galaxy S and the Galaxy Note series but also debut Apple’s new Retina HD technology. The dual-domain pixels in Retina HD displays pixels allow a wider viewing-angle than ever experiences before on an Apple device, it features a resolution of 326 ppi on the iPhone 6 and a stunning 401 ppi on the 6 Plus

Contrary to convention, this section is based on frames-per-second (fps) rather than pixels. Why, you ask? Because Apple believes it has the duty to revolutionise video like it once did for pictures. The new camera now only features stabilisation mechanisms that work in conjunction with the newly planet M8 chip, the gyroscope and the accelerometer; but now also owns something called Focus Pixels which delivers more information about your image to the camera and at faster speeds. Focus Pixels in itself is a technology which allows massive improvements in exposure, focus, face/smile/blink detection and in overall image quality but Apple couldn’t just stop there. The company has expanded video recording on it’s flagship device in a manner that now allows capturing videos up to 240 fps opening room for something Apple calls time-lapse videos as it proudly demonstrated at the keynote.

Moving beyond the above, the iPhone 6 and 6 Plus now support more bands on 4G LTE than any other device launched so far. It also has faster WiFi, stronger processing, motion detection like never before and the same intuitive feel that all Apple users know and love.

ApplePay is Apple’s answer to the “five decade old” plastic cards we rely on for our daily transactions. They have shortened down the process to a simple matter of touch and pay with Apple not becoming a part of the details of the transaction at any point in time. With big name partners on board the project is set to go as of October 2014. Apple said department stores like Macy’s and Bloomingdales, drugstores including Walgreen’s and Duane Reade, and other stores including McDonald’s, Staples, Subway and Whole Foods are participating in Apple Pay.

The technology works in the following steps:

In order to analyse the process in more detail, we’ll focus on the more important aspects specifically:

Creating your wallet is as simple as taking a picture of your credit card from the iPhone’s built-in iSight camera. The data is forwarded to the Apple servers which then verify whether or not the card in question belongs to you and upon confirmation add it to your collection.

The Apple executives spent a length on time to stress on the fact that the process is not only securely encrypted so as to protect your information at all times but that Apple never get’s informed of any of your transaction specifications. The transaction occurs between yourself, the vendor and your financial institution. Apple just stands to verify the authenticity of usage.

“Apple doesn’t know what you bought, where you bought it and how much you paid for it.” – Eddie Cue (Senior VP: Internet Software and Services)

All of your data is stored on the phone in a separate secure chip and every transaction generates a one-time security code as compared to the stagnant, standard three-digit code on the back of conventional cards.

Not only does ApplePay intend to drastically shorten the payment process hence leading to a more comfortable shopping experience overall but it also creates a whole new dimension of security. By using ApplePay you are protecting yourself from third-party access to your card as is the case when you hand it to the cashier at any store.

At last, the AppleWatch. The new device debuted with an interface completely re-imagined as compared to traditional iOS devices, use of the century old watch crown as a “Digital” Crown as a dual-purpose zoom-tool and home button, a new generation of touch screen that detects the intensity of your contact, body interaction and measurement like never before, the completely re-imagined version of texting, increased interactivity to ensure time-utilisation, a range of clock screens ranging between traditional and bizarre and millions of combinations possible between the three different editions: The AppleWatch. The AppleWatch Sport and the AppleWatch Edition. The AppleWatch continues to amaze in both software and hardware degrees of measurement from the previous standard and Apple promises that the wait to the early 2015 launch will be worth it.

Each of the three versions of the AppleWatch name above feature a separate hardware enclosure (available in the sizes of 38mm and 42mm) making itself distinct from the rest and specifically designed for it’s intended usage. The AppleWatch itself has a highly polished stainless steel and space black stainless steel case, the AppleWatch Sport has lightweight anodised aluminium cases in silver and space gray and the AppleWatch Edition has cases crafted from 18-karat gold that Apple metallurgists have developed to be up to twice as hard as standard gold. Each features a the Apple Digital Crown and what looks to be reminiscent of the traditional iOS device “Wake/Sleep” button towards the left edge of the watch face. Questions are being raised and yet remain unanswered regarding the watch’s processing capability and battery life; Apple continues to remain silent on the matter. Towards the bottom we see a circular sapphire enclosure which functions dually as both a charging port and a body monitor.Further details of an extension of their hardware in the customisability section below.

Rather than shrink iOS and attempt to (potentially miserably) miniaturise it onto a screen the size of your wrist, Apple has instead created a new software altogether. The clock, according to Apple, is the “centre of the universe” with apps circling around it into the sides. Browsing on the home screen is easy by apps zooming in and out of size on the screen. The apps themselves have been redesigned to suit your needs as a watch-piece and a personal assistant with the focus being on clear, readable data available just as you need it. The rotary device on the side is called a “Digital Crown” and can be used to zoom-in and out of relevant apps (such as the “Home” screen, Pictures and Google Maps) and also functions as a home-button when pressed inward returning you in and out of the home screen. The button below the crown can be used to access your favourite contacts to contact them either through your iPhone or through a custom-built messaging app which also features a pictures feature and takes advantage on the Taptic Engine inside the device as well as through Apple’s take on emoji which lets you customise Smiley’s eyes and mouth as well as something even as personal as your own heartbeat which is measured by the device attached towards the bottom of the bracelet. The Glances software is a customisable notifications menu (similar to Google Now) and displays all of your important information as and when you need it. The clock faces even feature a very Dan Brown-esque Mickey Mouse face.

There are two apps to encourage to towards following a healthy life and they are called Activity and Workout:

The Activity app monitors your movements throughout the day using the Apple developed Fitness Engine.It measures three different aspects of your activity: Stand (the period you spend on your feet rather than sitting down), Move (the amount of calories you’ve burned) and Exercise (which shows the minutes of brisk activity you’ve done). It collects a wide array of data and is aimed towards making you want to get out of your bed/seat/chair.

The Workout App is meant to help you take your fitness further by encouraging you to set higher milestones on your morning jogs. It lets you customise your goals and once you get going it helps in measuring your efforts along with encouraging messages on the way as well as badges when you break your milestones or achieve one of Apple’s “activity goals”.

Each watch comes with 6 different kinds of bracelets including metal mesh, rubber straps, leather bracelets and linked metal. Each of three kinds show a different take on the bands with a beautiful red leather and gold buckle version being one of the most prominent of the Apple Edition device. The bracelets are detachable and can be removed, replaced and interchanged as per your convenience.

With that, the announcements come to an end. Make sure to visit the Apple website for more beautiful images and in-depth specifications of each aspect on the new devices and services announced.

The event ended with Tim Cook humbling himself to the applause of the crowded Flint Centre as well as a low-tone promotion of the iTunes Music Festival presently happening in London. In a surprise appearance, the members of U2 filed on to the stage for a live performance of “The Edge” as well as the announcement of a one-month exclusive and completely free release of their new album “Songs of Innocence” on iTunes. Needless to say, the event ended on a high note. 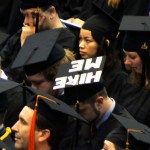 10 Mistakes Usually Fresh Graduates Do in Their Resumes