Comsats Institute of Information Technology’s (CIIT) dual degree which it was offering in collaboration with Lancaster University of United Kingdom has been deemed worthless by the Higher Education Commission of Pakistan.

The statement was made during a briefing on Wednesday by HEC Chairman Dr Mukhtar Ahmed to the Public Accounts Committee (PAC). He said CIIT had been charging millions of rupees from its students for the dual degree in MS which is worthless.

Dr. Ahmed said that the HEC had not been consulted when Comsats decided to offer the program under question in 2010. The HEC had been only informed later in 2013 that the institute was offering such a program and was charging £2,000 per student.

In addition to the HEC, UK’s education council also did not recognize CIIT degree. Furthermore, it was found out that Lancaster University awarded MS degrees after five years of study while CIIT was offering the degree effectively after only four years of study, Dr. Ahmed explained.

It was also found out by the HEC that Comsat’s engineering degree was also unrecognized by Pakistan Engineering Council (PEC). Upon questioning by the PAC, the Chairman of HEC said that the commission had no power to stop the institute from offering the program.

The PAC had summoned the rector and pro-rector to the meeting but they were absent. 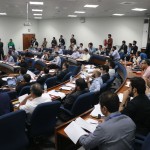