After a successful run for 3 consecutive years, djuice has announced the opportunity for Pakistani mobile app developers to showcase their unique ideas and creations, and compete for some exciting prizes and perks. The “Apportunity 2014” competition, officially announced by djuice this Tuesday, calls for the developers of all ages and from all platforms to develop apps that target select categories, and win big if their apps are shortlisted as the best among the lot.

Microsoft is the major partner for the competition this year, hence most of the prizes and offers up for grabs come from Nokia, like Lumia-series smartphones, and Microsoft. This partnership, however, does not limit the platform for which the apps can be developed to Windows Phone. Developers can demonstrate their apps for any of the major mobile platforms like Symbian, Android, iOS, in addition to Windows Phone.

In order to participate, developers have to register with djuice here and submit their prototype app by July 31st, 2014. After registration, app(s) can be sent at apportunity@telenor.com.pk. Multi-developer teams and companies can also submit their apps, but every member will have to register individually. Any individual or team can also submit multiple apps to raise their chances of winning the competition.

Noteworthy terms and conditions of the competition state that once the app is submitted, it—alongside all related media and resources—becomes a property of djuice, and the company may use them however they deem appropriate. If the app includes a sale feature or in-app purchases model, djuice will offer the developers a select percentage of the revenue if the app is published on any of the online marketplaces. Developers must use djuice’s specified themes/artwork to maintain coherence across all submissions. This artwork kit can be found at the registration page under the section of App Development & Submission.

Developers can create and submit mobile apps for any of the major categories like Games, Entertainment, Business, Shopping, Education, Photography, Social and others.

djuice has stepped up the game by offering attractive prizes and perks this time around as well. The grand winner of the competition will win 200,000 Norwegian Krone (~$33,000) and a trip to Oslo to compete at Digital Winners 2014 conference. Runners Up will receive Rs. 200,000 (cash or equivalent prizes), while the best Internet App will receive Rs. 100,000 (cash or equivalent prizes). Each category winner will receive a Nokia Lumia smartphone, and there are 10 internship positions at Microsoft Innovation Centers to be won by the competitors as well. Developers of promising apps will also receive training from industry professionals on how to improve the apps, monetize them and making them successful on the highest possible number of devices.

djuice’s Apportunity contests have received enthusiastic response in the past, and this year’s iteration is expected to boost up the participation, stakes, challenges and benefits. First offered in 2011, the contest attracted 28 apps from 19 developers, out of which 16 were published in marketplaces, accumulating above 40K downloads. 2012’s competition saw 83 apps from 45 developers and accumulative 355K+ downloads.

Apportunity 2014 sure is a great opportunity for the developers to showcase their skills alongside catching a chance to win some exciting prizes. If you are a developer, whether a professional or an aspiring one, this might be your big break to earn some exposure. Head over to the competition homepage to learn more about the Apportunity 2014: 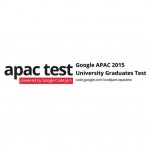 Google APAC Test is Happening and You Should Participate