According to the latest audit of its ad service, Facebook withholds certain job ads from women because of their gender. An audit conducted by independent researchers at the University of Southern California (USC) reveals that Facebook’s ad-delivery system shows different job ads to women and men even though they require the same qualifications. The findings come despite years of advocacy and lawsuits and after promises from Facebook to overhaul how it delivers ads.

The study supplies the latest evidence that Facebook has not resolved its ad discrimination problems since ProPublica first brought the issue to light in October 2016.

“We’ve taken meaningful steps to address issues of discrimination in ads and have teams working on ads fairness today,” said Facebook spokesperson Joe Osborn in a statement. “Our system takes into account many signals to try and serve people ads they will be most interested in, but we understand the concerns raised in the report… We’re continuing to work closely with the civil rights community, regulators, and academics on these important matters.”

Despite these claims, however, the researchers found no noticeable change between the 2019 audit and this one in how Facebook’s ad-delivery algorithms work.

In previous interviews, the company said it was unable to discuss the details of how it was working to mitigate algorithmic discrimination in its ad service because of ongoing litigation. The ads team said technical challenges had limited its progress. 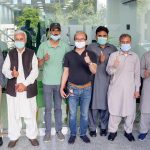