Google records its first $100 billion in a year.

Google is huge, as it pulls a lot of money from various sources from search engine to cloud computing. But it had not joined $100 billion club, until now. As of now, Alphabet (GOOGL), the parent company of Google has recently posted a record-breaking $110 billion in annual sales for the first time in Google’s 20-year history.

Interestingly, the company has recorded a record-breaking $27.27 billion revenue in ads’ business, from the total $32.3 billion it earned in the 4th quarter of 2017. The milestone is a testament to the strength of Google’s ad sales business, which continues to grow rapidly even though the company faced controversies over propagating Russian propaganda in the US elections in 2016.

Sundar Pichai who heads the Google division of Alphabet has said that Google Cloud services are a $1 billion business in each quarter. Meanwhile, he also called out YouTube, Google Cloud, and hardware as big focuses for the future of the company. Pichai said,

“These bets have enormous potential, and already they are showing real momentum and gaining traction.”

Moreover, Alphabet has posted around $15 billion in sales in 2017 from Google’s other services including cloud services and hardware products, like the Pixel phones and Google Home smart speakers. 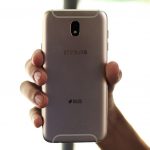