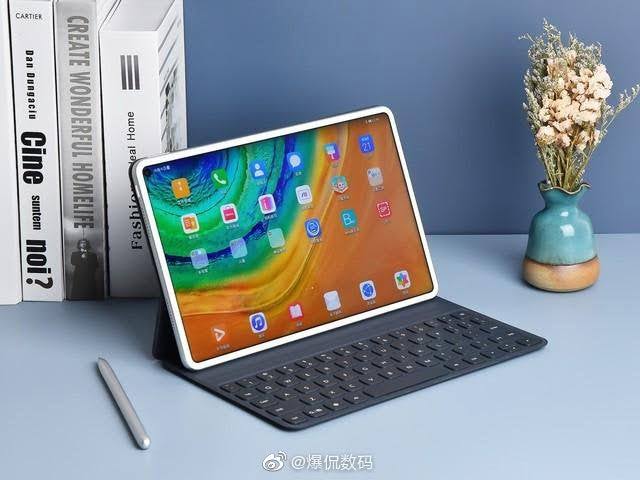 Huawei lifted the curtains on the latest addition to its product lineup, the MatePad Pro. This is the company’s flagship tablet and will go head to head with other high-end tablets on the market, such as Apple’s iPad Pro and Samsung’s Galaxy Tab. In fact, some would argue that it is almost an exact lookalike of the iPad Pro, using much of the same aesthetic cues and functionalities.

The design is indeed very similar to the iPad Pro, with a sleek metal chassis and a big 10.8 inch display housed in a relatively small body, thanks to very thin bezels. The display is a 2560×1600 panel which translates to a 16:10 aspect ratio, perfect for media consumption. There is a holepunch in the top left corner for the 8MP front facing camera and the tablet features an impressive 90% screen to body ratio. Huawei will include a stylus, almost identical to the Apple Pencil, that will attach magnetically to the tablet and charge wirelessly while attached.

Taking a closer look at the specifications of the new device, it is evident that the new MatePad Pro will be very powerful. The tablet will be more than capable of performing any productivity task you can throw at it, such as web browsing, answering emails, video conferencing etc. The device will use the latest Kirin 990 chipset, also offered in the Mate 30 Pro smartphone. You can choose between 6GB or 8GB of RAM and up to 256B of integrated storage. There’s a 13MP rear facing camera. The battery is a 7250 mAh unit with a 40W supercharger, and the device can charge wirelessly as well as charge other devices wirelessly.

It will be available from 12th December at a price of 3,299 Chinese Yuan.

previous
Daraz set to plant 11,000 trees in Karachi to fight effects of climate change in Sindh
random
next
Govt to develop electric bikes and wheelchair after the solar-power rickshaw
Trending Posts