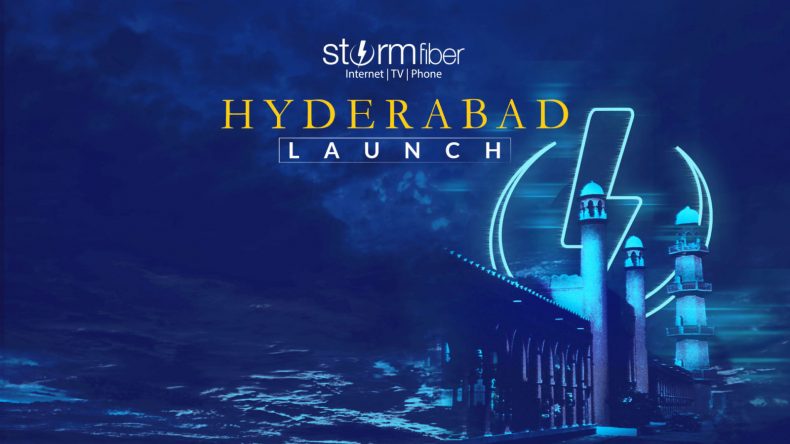 StormFiber strikes twice in a week, launching its services in Hyderabad after Multan, bringing its tally of cities to six. The announcement was made at an event hosted in the city, making its Triple Play (Internet, TV and Phone) services available in Hyderabad. StormFiber is already an established market leader in four major Pakistani cities, Karachi, Lahore, Faisalabad and Peshawar. Launching their Fiber To The Home (FTTH) services in Hyderabad after Multan represents a key milestone in StormFiber’s strategic expansion throughout Pakistan. In the first phase of its foray into Hyderabad, StormFiber will cover Qasimabad, Latifabad, Defence, Civil Lines, Muslim society, GOR colony with plans to expand in other major areas of the city. The second largest city of Sindh, Hyderabad is a historical city home to a suite of businesses and a burgeoning middle class, representing a rich demand for reliable internet that only a gigabit network such as StormFiber can deliver.

Ultra-fast and stable broadband service is an important catalyst for economic development in the modern era. To further these national interests, StormFiber aims to deliver consistent internet services on FTTH infrastructure, along with HD television and crystal-clear voice services. Access to one of Pakistan’s most robust fiber optic networks will help put Hyderabad on the map at par with global metropolitan cities.

Chief Guest Prof. Dr. Tauha Hussain Ali, Pro-Vice Chancellor, Mehran University of Engineering & Technology, Jamshoro pointed out that: “In terms of the future, an optical fiber based fixed-line broadband is an opportunity since it offers hundreds of megabits per second of data speeds and will ultimately allow StormFiber to offer smart home solutions besides also creating value for small merchants.

”Speaking at the event, Mr. Fawad Yousuf Laher, Managing Director, StormFiber said: “StormFiber has created a reliable platform for high speed internet services which will delight its users and empower them for swift multi-tasking and high-performance in their professional and social endeavors. The idea is to create an enabling environment for the citizens of our country, ultimately contributing to the economic development of our nation”

Industry insiders claim that StormFiber’s FTTH services have been well-received during its soft launch in the city.

The company seems focused on its ambitious plan to bring fiber broadband and triple play service to large sections of Pakistan’s population including difficult to reach areas of the country that possess the ability to develop unencumbered in the digital space. The company has deployed its fiber technology backbones throughout the country and has plans to provide high-speed services in the following additional cities including Islamabad, Rawalpindi, Gujranwala, Sargodha, Sialkot, and Quetta among others.