Intel just unveiled its most powerful processor Core i9 for laptops 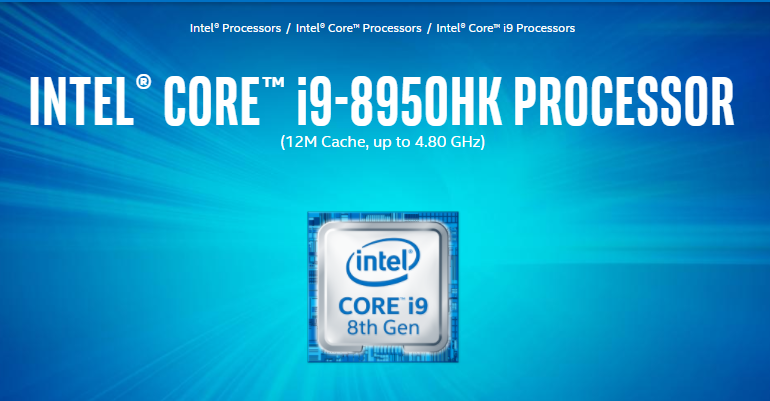 Intel announced the first Core i9 8th-generation chips for laptops today. The model is named as Intel Core i9-8950HK, which is said to speed up to 4.8 GHz with turbo boost and is the first of its kind processor offering six cores and 12 threads. The company promises that the processors will translate up to 29% overall speed boost compared to the previous seventh-generation Intel chips, with over 41% improvement in gaming and 59% faster 4K video editing. The processor has a massive 12MB cache memory and is also unlocked for overclocking.

Intel says that this Core i9 processor is “the best gaming and creation laptop processor Intel has ever built.”

Intel also announced Core i5 and Core i7 processors for laptops along with the Core i9. They are also based on the company’s latest 14nm++ architecture (known as Coffee Lake) instead of the previous eighth-generation Kaby Lake R chips.

The previous 8th-generation chips were a part of the U-Series of Intel’s processor while the newly announced i9, i7, and i5 Coffee Lake chips are the company’s H-series lineup. The new Coffee Lake chips are specially designed for hardware manufacturers’ premium laptops (with more powerful discrete graphics cards) where power is the main concern.

Along with these beautiful new Coffee Lake chips, Intel added a support for Optane memory to both the eighth-generation mobile and desktop chips. This will help speed-up the processor more compared to the traditional memory systems. The company is introducing the new Core i5+, i7+, and i9+ badges as well to differentiate between the previous generations and, the new Intel processors and Optane memory.

Intel is also introducing new tel Core i5+, i7+, and i9+ badges to indicate that new computers feature both new Intel processors and Optane memory from the start.

previous
How do rich people invest their money?
random
next
Nokia 9 with a triple rear camera and 8GB RAM revealed in a leak
Trending Posts