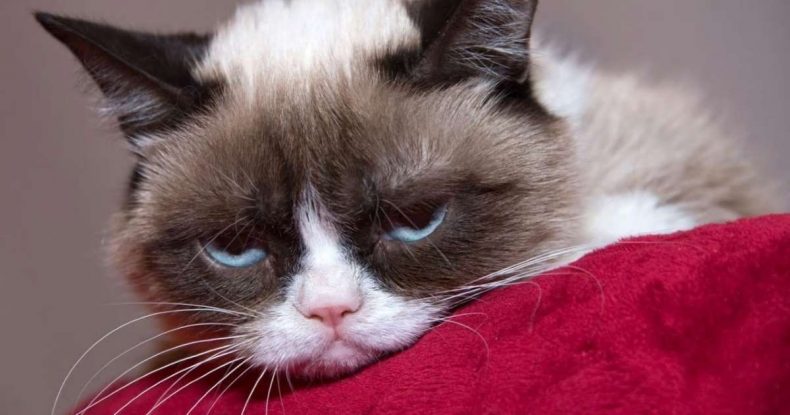 One of Internet’s most favorite cat just died this week and people from around the world are paying their respects to the cat that made memes fun to watch.

The cause of death was a urinary tract infection. Grumpy Cat’s death was announced by its owners via social media with a post which celebrated how the Cat’s unique expressions “helped millions of people smile all around the world.” In a tweet, the owners shared their grieve over the loss of their beloved pet.

“Despite care from top professionals, as well as from her very loving family Grumpy encountered complications from a recent urinary tract infection that unfortunately became too tough for her to overcome. She passed away peacefully on the morning of Tuesday, May 14, at home in the arms of her mommy, Tabatha.”

Some days are grumpier than others… pic.twitter.com/ws209VWl97

Grumpy Cat’s real name was Tardar Sauce and rose to fame quickly after a 2012 post went viral on a Reddit post. At that time she was five months old and instantly became an Internet meme sensation because of her frown and small size owing to her feline dwarfism.

While there are many cats which are famous in the world of memes but the Grumpy Cat has a different league primarily because of her looks and appearance. This made her a cultural phenomenon, she appeared on talk shows (no kidding) and featured in promotions for Cheerios and Friskies. Furthermore, Lifetime even made a movie on the Grumpy Cat, titled “a Grumpy Cat holiday movie”. It doesn’t end here, Grumpy Cat has a ton of Grump Cat-branded merchandise.

“Besides being our baby and a cherished member of the family, Grumpy Cat has helped millions of people smile all around the world even when times were tough. Her spirit will continue to live on through her fans everywhere.”