Junaid Malik COO Digital at Bramerz resigns for his own startup

Junaid Malik, COO of Digital at Bramerz – a digital media agency based out of Lahore with digital footprints nationwide – has resigned from the organization. He will be working full time on his own startup which is going to be a mobile based application.

“Working with Bramerz was a great learning curve. During my tenure at this organization, we managed to sign up over 100 brands. Interacting with these brands and managing my team was something that will be helping me in moving forward.”

Junaid Malik had previously held the position of VP Customer Development at Pring — A text-based social network which was acquired by Naseeb. Moving forward, Junaid is quite optimistic about the prospects of his startup. Although, he was a bit reluctant in sharing the details, but we managed to get out the information that it is going to be a content based application.

The details of the mobile application will be revealed later next month. He has already raised seed funding and a team is working full time on the product. While talking about his partnership with Bramerz, he explained “I have gone for the good and have no stake, profit sharing in the company anymore.” 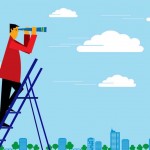