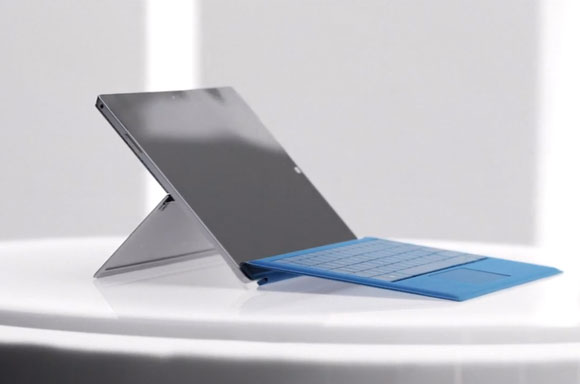 Amidst the on-going battle of powerful devices that feature a large-enough form factor to be both productive and portable, Microsoft has officially unveiled the third generation of its Surface devices— Surface Pro 3 —at a New York event this Tuesday. With a product announcement heavy with claims on the device being a perfect replacement for both laptop and a tablet, Microsoft had a lot to show what it’s been working on since the last iteration of the series, the Surface 2. 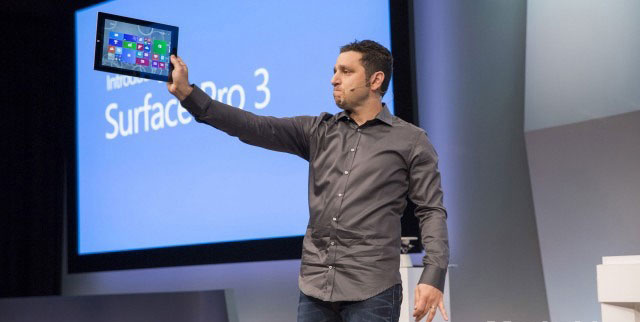 The first major noticeable difference between Surface Pro 3 and any of its predecessors is the display’s aspect ratio. While Microsoft originally opted for an aspect ratio of 16:9 for the 10.6-inch display with full-HD resolution for the older Surface 2, Surface Pro 3 features a 3:2, 12-inch display with an impressive resolution of 2160×1440 pixels.

Some major features that Microsoft’s corporate VP for Surface, Panos Panay stressed on in particular during the presentation were the lightness and thinness of the product. He even went on to put it side-by-side on a physical scale against an Apple MacBook Air, and the Surface, obviously, came out lighter. At 9.1mm thick and 800 grams heavy (without TouchCover attached), the device does sound exceedingly portable when compared to the competition.

Surface Pro 3 also features a re-designed multi-position kickstand and fan. Thanks to the newly-incorporated full-friction technology, the device can be used in ‘Canvas mode’ at 150° in addition to the classic landscape mode. The fan is claimed to be 30 percent more efficient than previous one thanks to a major redesign that helps radiate the heat through the vents radially, a feature whose worth is realized when the Haswell processors inside are put through their cycles. 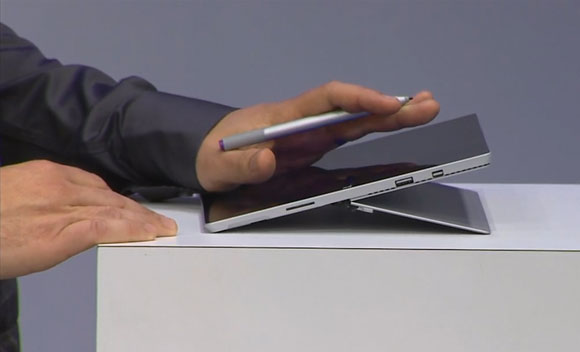 Other significant within-the-package offerings are a microSD card-reader, a Mini DisplayPort and a full-size USB 3.0 port. The battery is claimed to last 9 hours of web-browsing and Dolby Audio-enhanced speakers are 40 percent louder as well.

There are plenty of updates on the accessories’ side as well. Surface’s well-received TouchCover keyboard is now thinner and improved, and it can magnetically latch onto the display to provide more stability when using the device in one’s lap, contributing to what Panay calls the device’s “lapability”. Panay also admitted that the trackpad on the original TouchCover was far from perfect, triggering a redesign effort that has resulted in 68 perfect larger trackpad that is also 70 percent less prone to touch-friction. 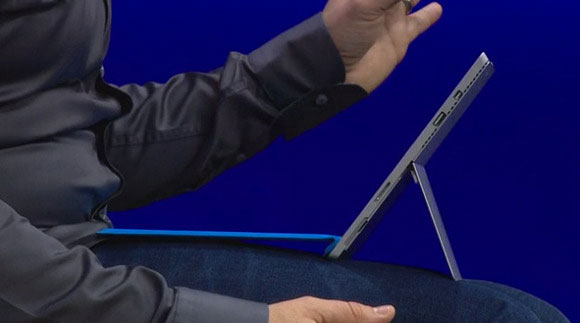 The Surface Pen has been redesigned as well and it has been optimized to take advantage of the extremely thin optical film under the display to remove the “writing parallax”, or the sense of a gap between the pen’s tip and the device. The pen now incorporates a press-button on its top to quickly launch OneNote even when the device is in sleep mode, and to send whatever is on the screen, like photo or a webpage, to OneNote for further manipulation and editing. Adobe will also release a touch-focused version of its Photoshop suite with capabilities to fully exploit the offerings of stylus and touch devices. Another optional accessory is a desktop dock that can project the Surface’s display to 4K monitors.

Surface Pro 3 will be made available for pre-orders in the US as of Wednesday and its base price will be $799 for standard model configured at Core i3, 64 GB of internal memory and 4 GB of RAM. The specifications can be altered to Core i5 or Core i7 processors with 128, 256 and 512 GB of memory, with increasing prices. A full-blown model, for example, featuring Core i7, 8 GB of RAM and 512 GB of drive space will cost around $1950.

Has Microsoft been able to find the sweet-spot among the form-factors that it expects to replace with one device? Do tell us in the comments below. 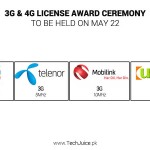