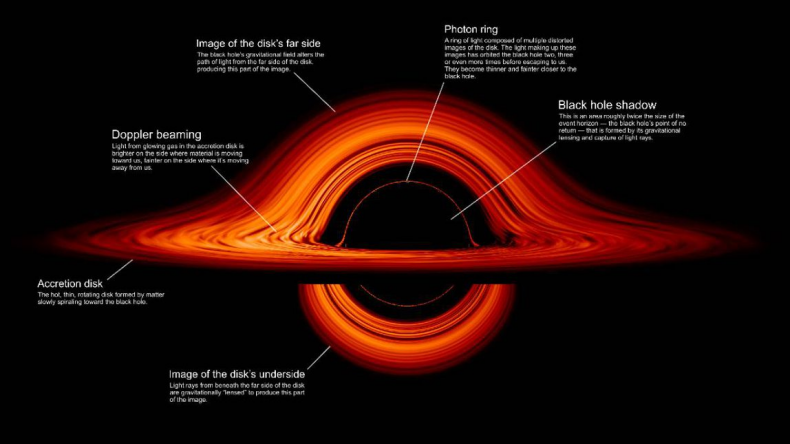 One of the most mesmerizing scientific breakthroughs of this year includes the image of the Black Hole obtained by NASA through the collaboration of Event Horizon Telescope (EHT). The blurry orange picture took 5 petabytes of data which required a big team of scientists to develop an algorithm in order to extract an image from this huge amount of data.

As astonishing and jaw-dropping this new image of the black hole was, it wasn’t really much to look at, until
Jeremy Schnittman created a simulation for the image using a custom software at NASA’s Goddard Space Flight Center.

Black Holes are immensely dense regions of space with enormous gravitational pull, and nothing; not even light can escape this pull. Any object that comes near the vicinity of the gravitational pull gets sucked right in, getting pulled in a spiraling manner losing its energy and angular momentum.

From the looks of it, we are seeing the simulation from the top edge, so the light that seems to appear at the top of the image is actually coming from the back of the black hole, viewing this cosmic natural creation of destruction. One can be absolutely mortified and enthralled at the same time.

As we observe closely, we can also see that the matter at the left of the image seems to be more bright as it appears to be moving towards the viewer and dimmer as it moves away on the right side, this observation can be explained by a phenomenon known as the “Doppler beaming”.