In a tweet shared by Prime Minister’s Advisor on Commerce and Investment Abdul Razak Dawood, Pakistan reported a record increase in December 2020 exports compared to the previous year. Exports stood at a staggering $2.357 billion compared to $1.993 billion in December 2019, which shows that the economy is recovering at a stable rate despite the pandemic second wave.

While announcing the figure, this is what the advisor said on Twitter:

It gives me immense pleasure to inform that, Alhamdolillah, according to provisional data, Pakistan exports for month of December 2020 have grown by 18.3% to USD 2.357 billion as compared to USD 1.993 billion in December 2019, an increase of USD 364 million over December 2019.1/4

It must be noted that this is the highest ever export increase in the month of December as announced by the advisor:

This is the HIGHEST EXPORT EVER IN THE MONTH OF DECEMBER.
For the period July-December 2020, our exports increased by 4.9% to USD 12.104 billion as compared to USD 11.533 billion in the corresponding period last year. 2/4

He commended the exporters of the country for continuing their operations despite these tough times and achieving this feat:

This shows the resilience of the economy of Pakistan and it is a vindication of the government’s policy to keep the wheels of economy running during COVID-19 pandemic. I commend our exporters for achieving this feat during these testing times… 3/4

The Government is also working to take IT exports to $5 billion by  2023. 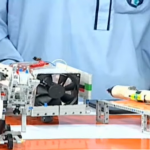