Since the start of the 21st Century, Entrepreneurship has been the new, trending career to pursue. People of all ages have been thinking up ideas, working on business plans to mass produce their products or services, and selling these products or services across the globe. The turn of the century has brought with it many new startups and have made many people across the globe very, very wealthy.

Pakistan, too, has seen many such successful Enterprises and Startups. One of which comes from a record company called Saarey which has launched Saarey Music.

This fame has now also been recognised by a US-based Startup competition organized by Columbia University, an Ivy League university regularly ranked among the best in the world.

The Startup Columbia Challenge of the 2020 Columbia Venture Competition conducted by Columbia University. It is a New York- based competition and is designed to judge and rate the Startups of that year in the preset categories. The challenge is, “all about customer development and demonstrating product-market fit,” said Faraan Irfan, the founder of Saarey. Him and his startup have been ranked one of the top six companies in this international competition. He also mentioned that the competition was open to all Startups from Columbia University and, being the founder, him and his team were, “thrilled to be in the finals.” 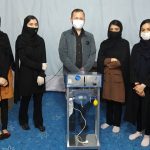