Samsung Galaxy A7 (2016) Review: The Challenger 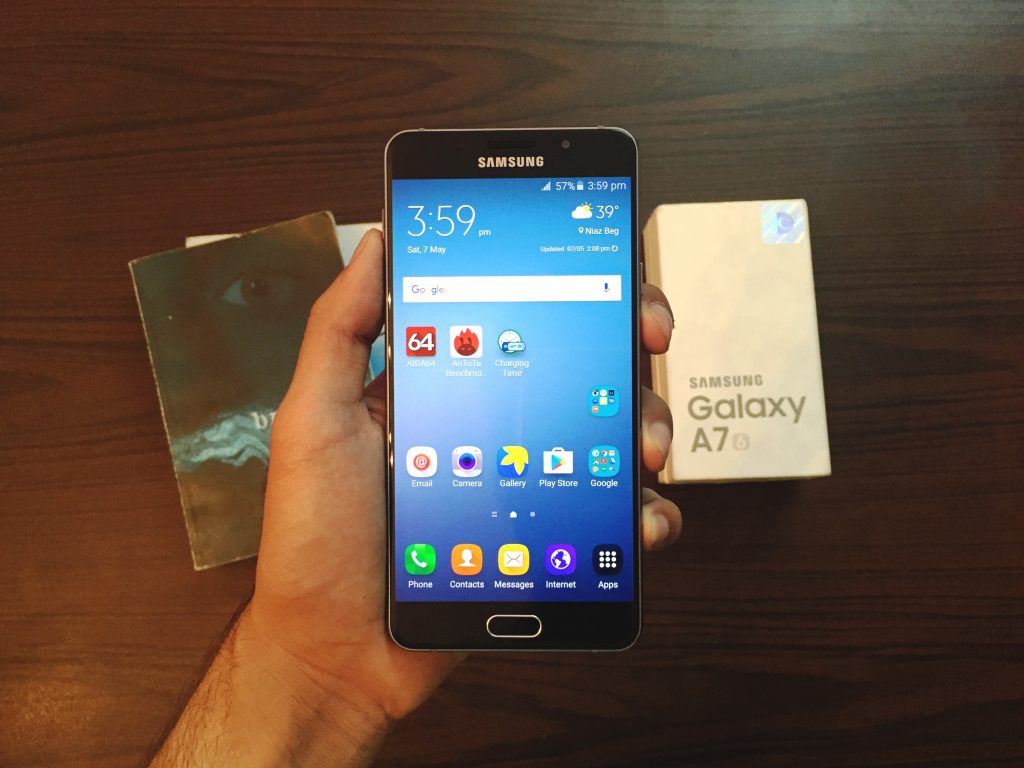 The Samsung Galaxy A7 is definitely a looker. It’s no S7 Edge but it definitely stands out from the crowd while still being easy on the eyes. There’s a very distinctive premium look and feel that isn’t always present in a budget device. It’s apparent that Samsung is finally making some smart decisions with the sleek chamfered metal frame that complements the vibrant display on this phone. Also, thankfully, the camera doesn’t protrude as much as it does on the older model. 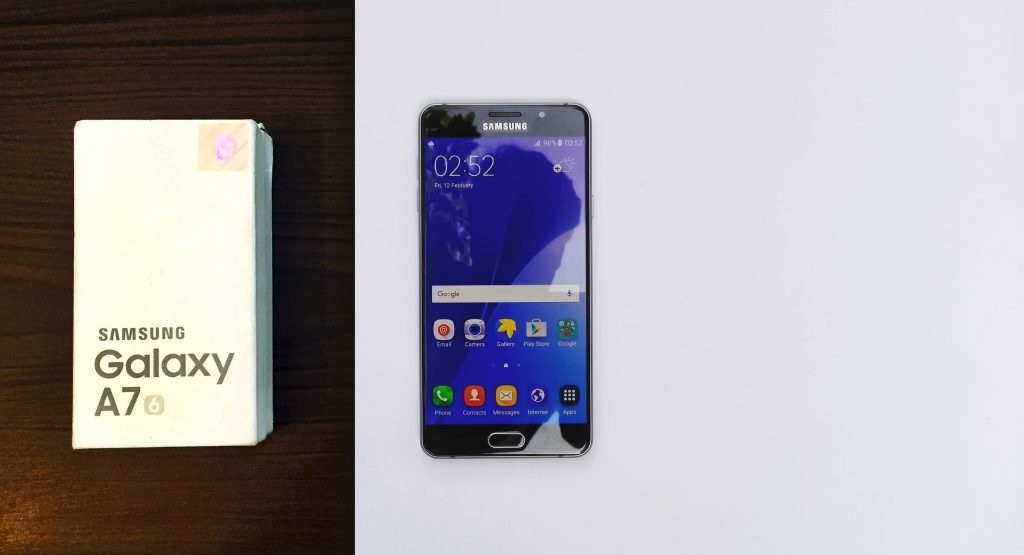 On the design side, the phone is a pleasure to look at. The chamfered frame blends with the front and the back of the phone, making the edges seem rounded due to the thin bezels. The build quality is superior. The metal frame is sandwiched between two panels of 2.5D Gorilla Glass 4. Although the glass on both sides does give the device a premium look and feel, it is prone to smudges and fingerprints which are very noticeable on the black unit that I had. At first glance, I expected the phone to be slippery, but it was actually quite comfortable to hold and use even with the big 5.5-inch screen. 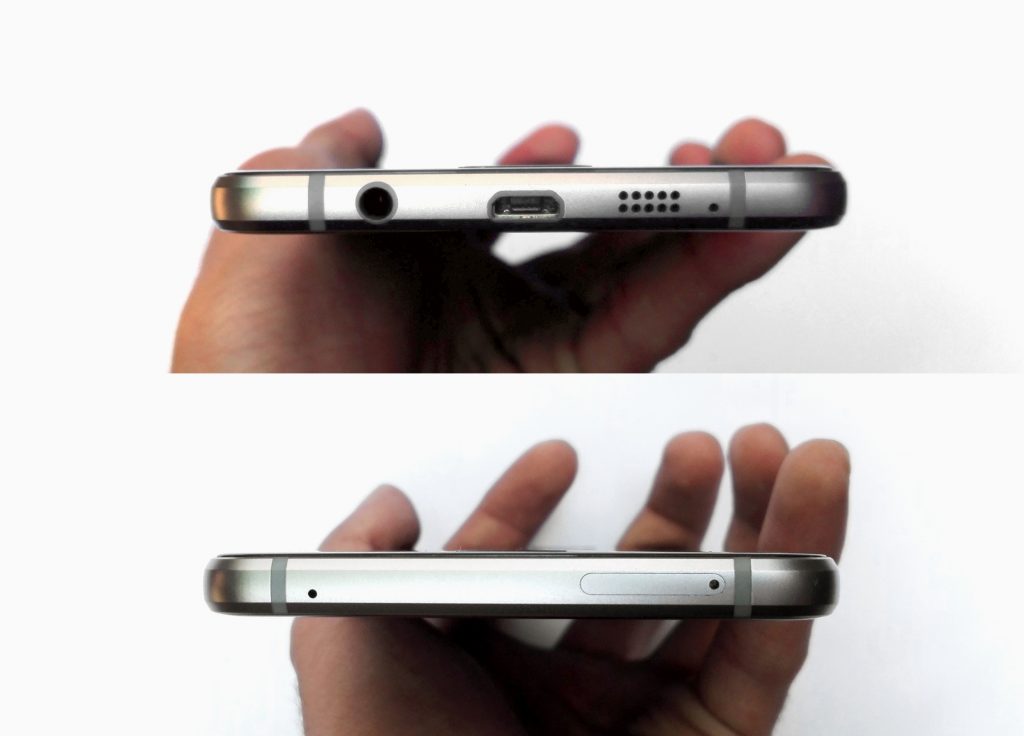 The home button/fingerprint sensor is metal-clad and offers great tactile feedback. It surrounded by the Recent Apps button on the left side and the Back button on the right side. The volume rocker sits on the top left side of the device and the power button sits on the right side. Both are easy to reach without having to exert yourself. There is a Nano-SIM card tray + microSD card tray underneath the power button and the secondary Nano-SIM card tray rests on the top of the device with the noise-cancellation microphone.

On the bottom of the device, there is a number of unsymmetrically placed components such as the 3.5 mm headphone jack, charging port, speaker grill, and microphone. Even on the right and the left side of the device, the components are not aligned. Honestly, Samsung, when you ignore small but important details like these on a device that looks so phenomenal, it seems like you lack the willingness to give your customers the best there is. 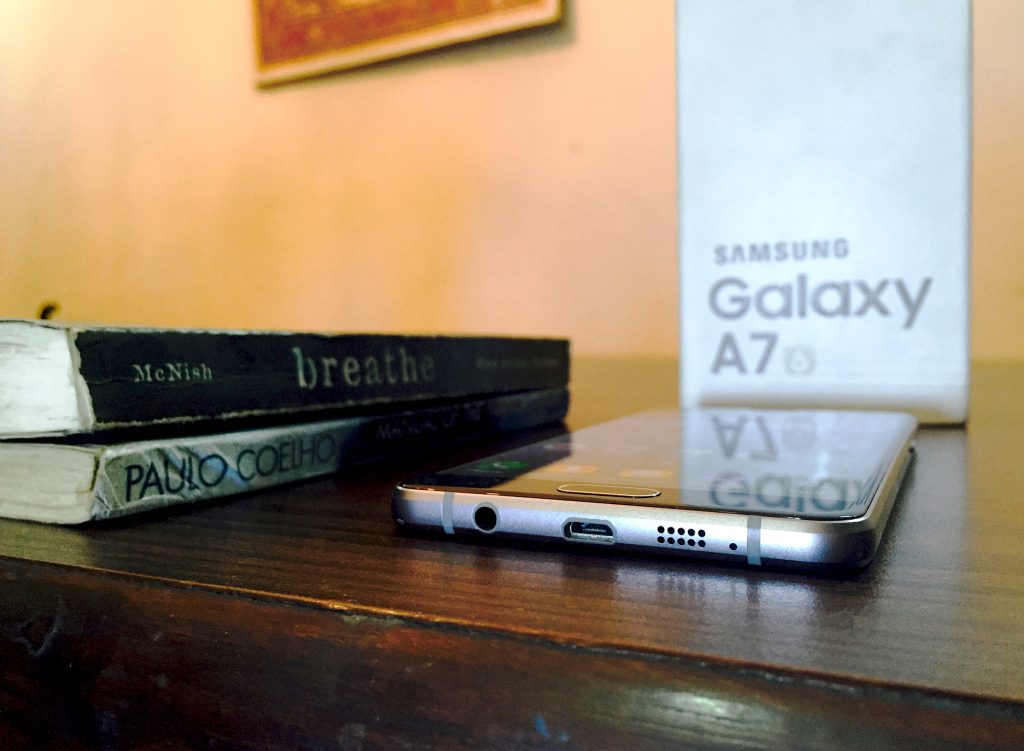 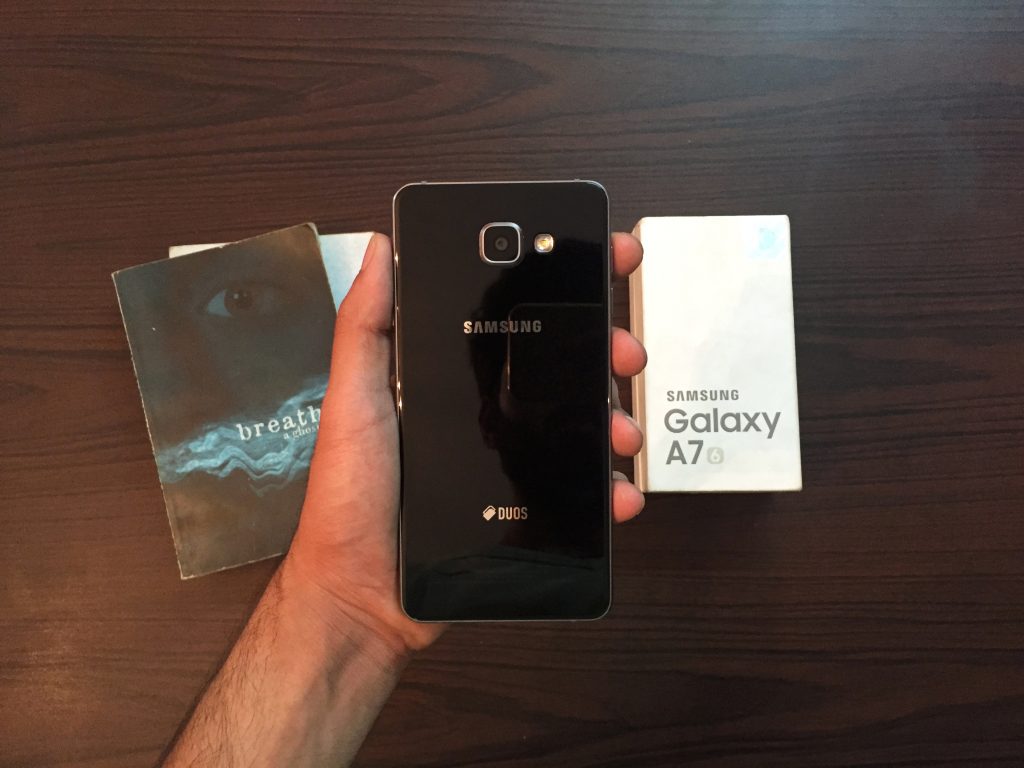 Samsung has significantly improved their displays since the days of the S4 and the S5. The Super AMOLED Full HD screen has some of the most vibrant colors and definitely the deepest blacks I’ve ever seen on a smartphone. You won’t even miss the absence of a higher resolution. The internal optimization known as Adaptive Display makes the colors pop and adjusts the sharpness, saturation and color range automatically. Although this optimization makes the screen amazing to look at, it tends to oversaturate the colors which may not be everyone’s cup of tea. It also makes editing photos on the device a bit of a hassle as the photos you edit may not look as appealing on other devices as they did on the A7. Aside from that, it is an absolute delight to watch videos, read, and play games on this device because you’re always in awe of how stunning everything looks on-screen.

The display has great viewing angles and is considerably bright in sunlight. The screen was comfortably visible on full brightness even in harsh sunlight which is a feat Samsung should be commended for. 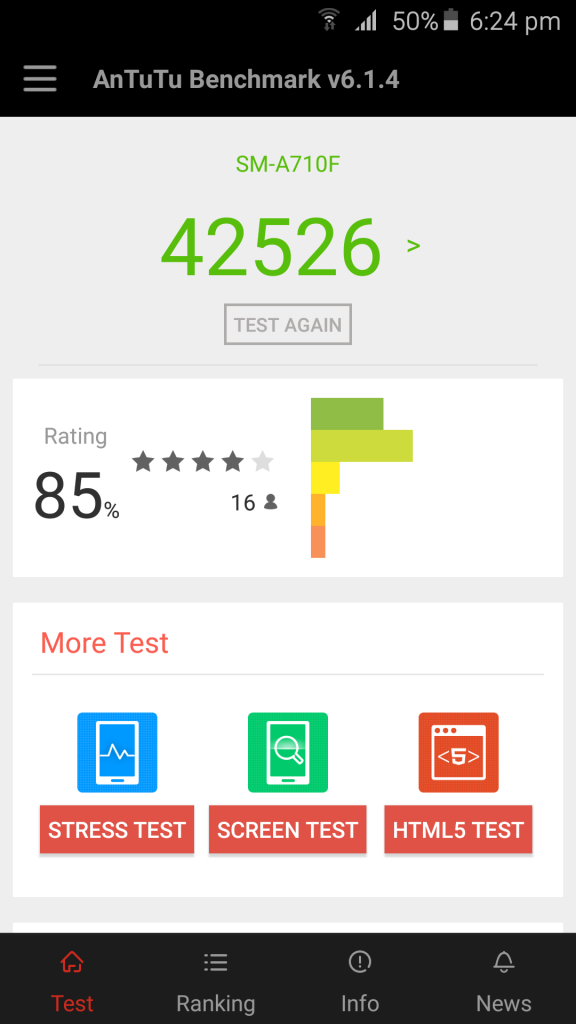 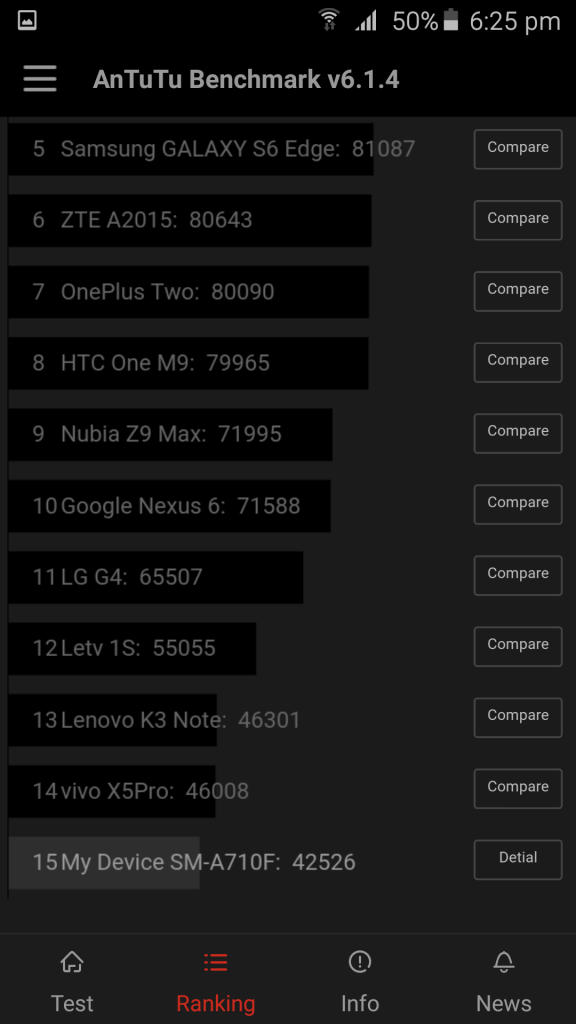 The Samsung Galaxy A7 contains a Qualcomm Snapdragon 615 processor, clocked at 1.5 GHz, and backed by the Adreno 405 GPU. The processor is rather outdated and doesn’t do justice to the whopping 3 gigabytes of RAM which results in significant lag in the UI. There’s visible stutter in animations when shifting between apps or the homescreen, or even when scrolling. However, the device handles graphic-intensive gaming pretty well most of the time. There were times when Modern Combat 5 ran without even the hint of a jitter but at other times, there would be noticeable stutter during gameplay. The sluggish performance can partly be attributed to Touchwiz apart from the limitations of the processor. If you like your device snappy and jitter-free, I wouldn’t suggest that you make this your next phone. 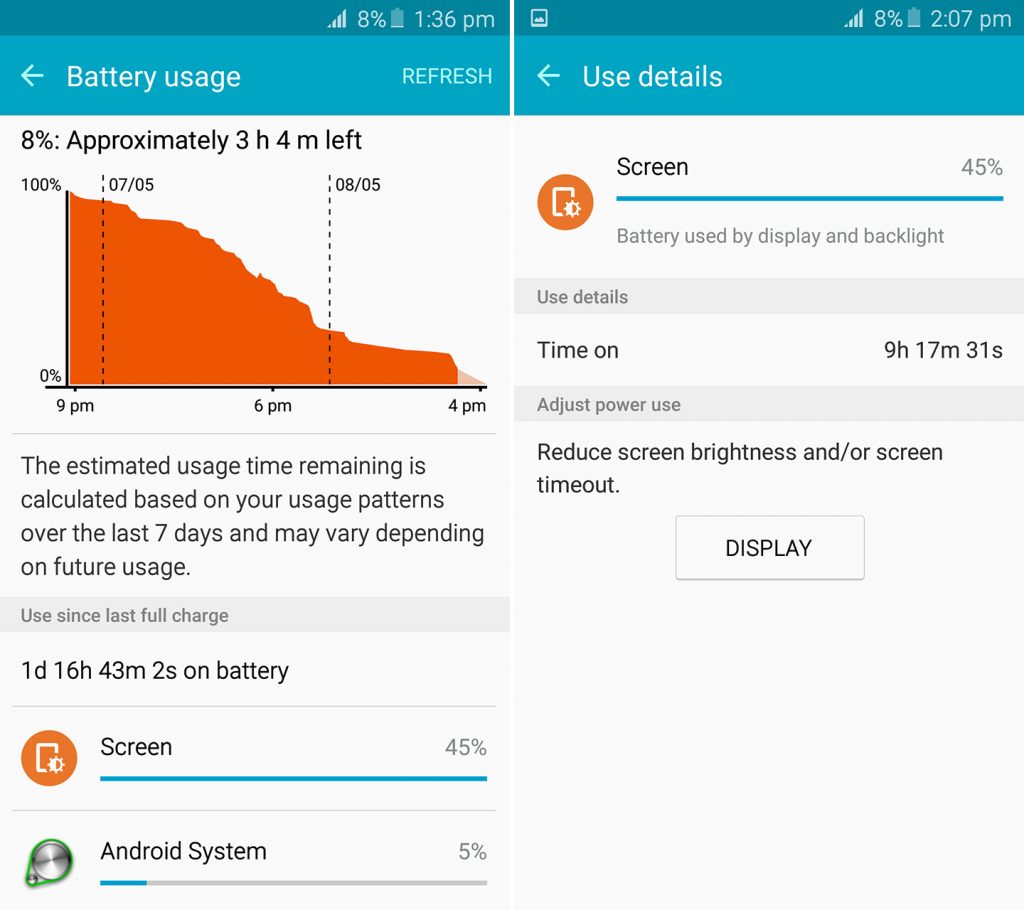 The 2015 Samsung Galaxy A7 housed a 2600mAh battery, which lasted less than a day under normal usage. Samsung learned from it’s mistakes this year and not only upgraded it to a solid 3300mAh, but also added fast charging capabilities to the device which means that it easily lasts around 2 days on a full charge. The 9 hour screen-on time clearly cannot be ignored. Also, let’s not forget Samsung’s Power saving mode and Ultra power saving mode which are said to save battery power substantially and help the phone last even longer than 3 days, if necessary. 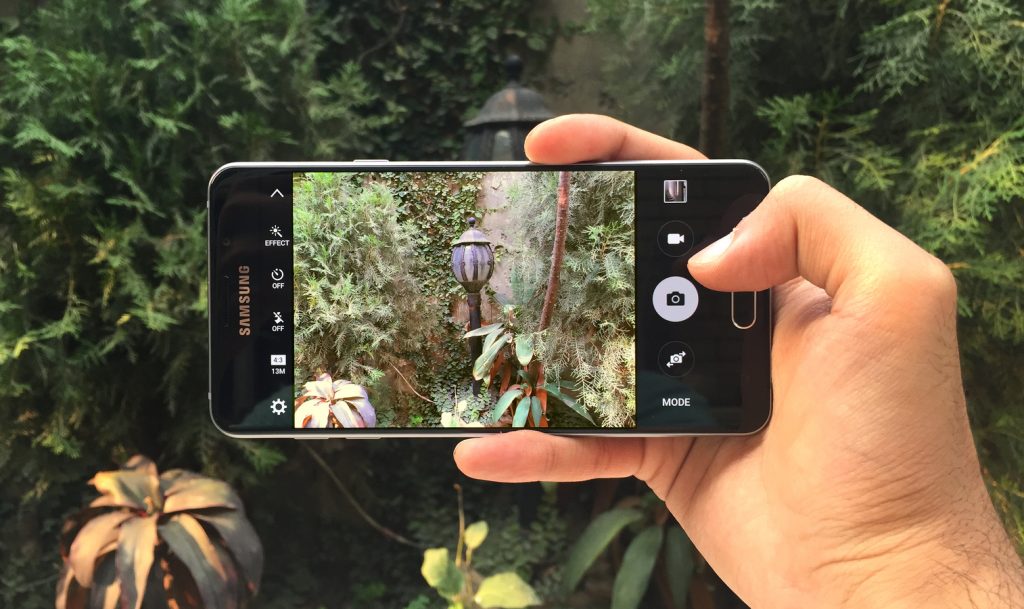 Before I wrote the review, I checked out various other reviews and opinions from daily users of the device, and most of do not seem to like the rear camera on this device. I’d have to disagree with them. Granted it isn’t one of the best smartphone cameras in the market right now but for a budget device, this camera does great. The 13 MP shooter focuses pretty accurately most of the time, the shutter doesn’t lag, the interface is easy-to-use and the f/1.9 lens lets in significantly more light than most mid-range phones. The major con is that it tends to overexpose the highlights in harsh sunlight but the HDR mode fixes that to some extent. There’s also a pretty standard manual mode that lets you adjust the ISO, exposure and white balance. The front 5 MP camera is bound to satisfy selfie/Snapchat needs because of the crisp detail. One of the best features is the quick launch option that has become a standard in Samsung devices. It’s really fast and very useful when you’re using the phone one-handed because you don’t have to navigate to the camera app to take a photo.

Android & Touchwiz: Sadly, the A7 ships with Android 5.1.1 Lollipop instead of 6.0 Marshmallow and with Samsung’s bad history with updates, this is definitely a downside. It is skinned with their own Touchwiz UI which is less of an eyesore now. It is closer to stock Android but still puts a strain on the device which leads to stutter here and there.

Fingerprint security: The fingerprint reader works pretty well and isn’t too time-consuming to set up like some older devices. It’s quicker to unlock the phone using the fingerprint sensor as well because it takes only a split-second of contact on the Home button and the phone pops open. 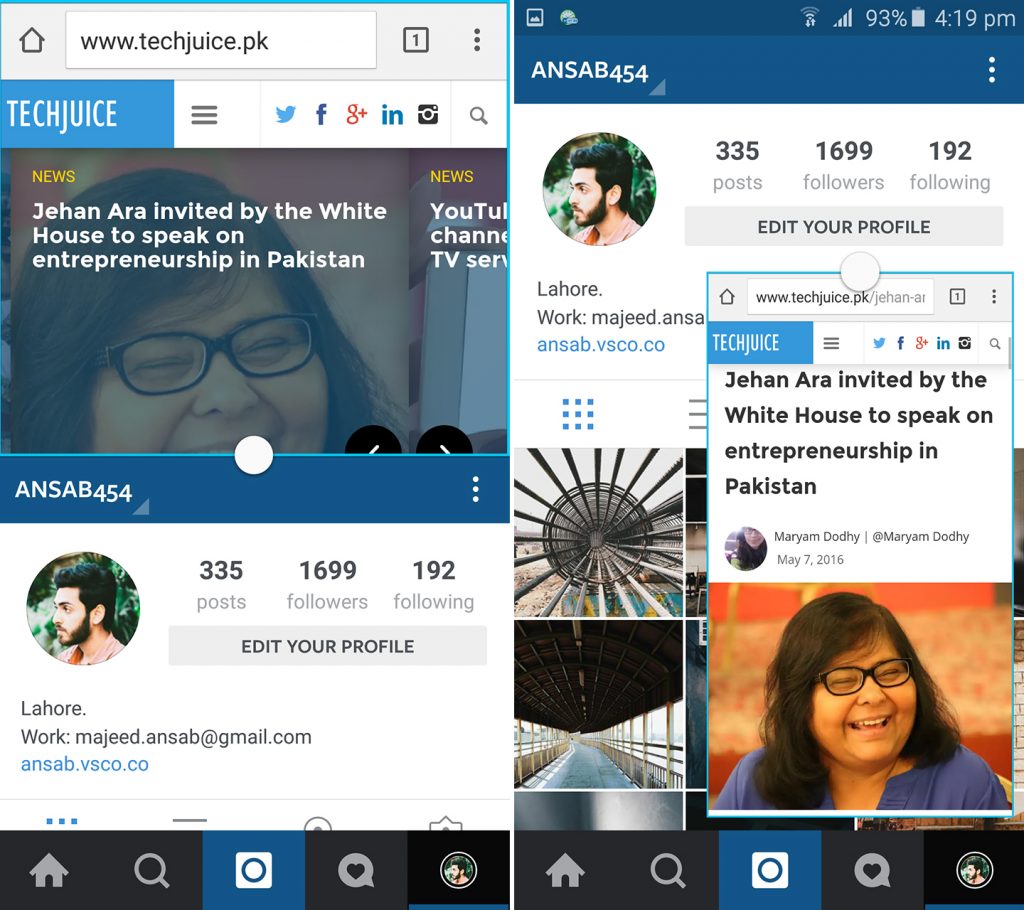 Everyday use and personal opinion:

I used the phone for almost a week before I formed any solid opinion of it. The phone is well-built and it feels like Samsung might have actually thought this through, for the most part. On first use, it impressed me with the vibrant screen, solid metal frame and lack of bloatware. It’s easy to hold, not too hard to use despite the 5.5-inch screen and gives off the vibe of a flagship phone. The animation stutters and the scrolling lag did get a bit annoying after a while but I took solace in the fact that at least there weren’t any issues when I was using playing games or using Lightroom on the device.

My favorite things about the phone were probably the battery and the camera. The battery life was great. It was exactly what I had wanted with the S6 but Samsung had failed to deliver back then. The camera was solid as well. As an active Instagrammer, I spent quite some time testing the camera and using it on a day-to-day basis and I have to say, it performed better than I expected. It does tend to overexpose in harsh sunlight but normally, it works perfectly fine. The details look crisp on the screen and HDR works well on cloudy skies.

On the other hand, I’ve always had a bit of a problem with Samsung’s front cameras. The wide angle lens tends to distort your face unless you keep it right in the middle of the viewfinder and at a specific distance. But I guess that’s a compromise that has to be made so group shots can be taken more easily.

The device has it’s advantages and disadvantages but for the average smartphone user, it’s a pretty slick daily driver if you get a good microSD card. Bottom line is; if you want a design and screen that makes onlookers go “Wow, what phone is that?” and a camera that puts holds up pretty well against other mid-range devices in the market, then go for it. If you can’t stand a laggy UI, can’t live without your huge music collection, and want the latest version of Android, you’d probably get your monies worth elsewhere. 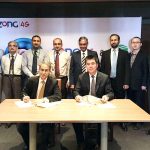 MCB to be powered with Zongs’ high-speed data services