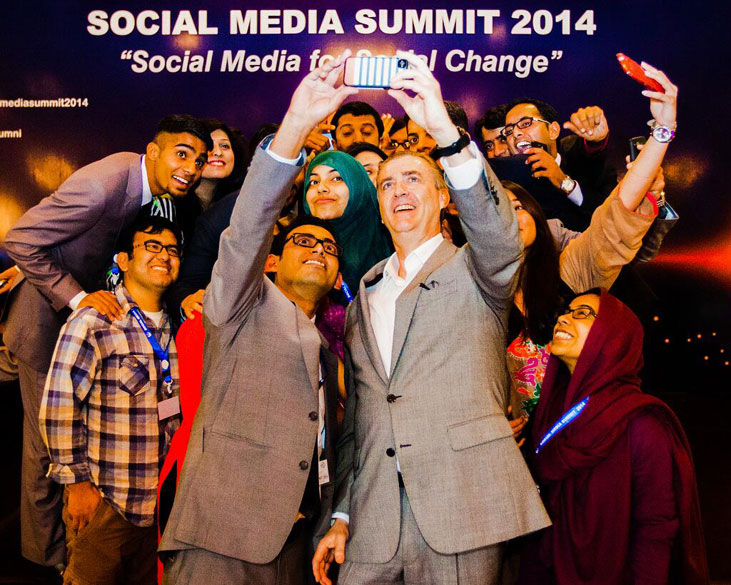 Forget the Oscar selfie, the new talk of the town is the SMS ’14 selfie that features US Ambassador Richard Olson with activists, journalists, bloggers and Social Media Personalities from all over the country. 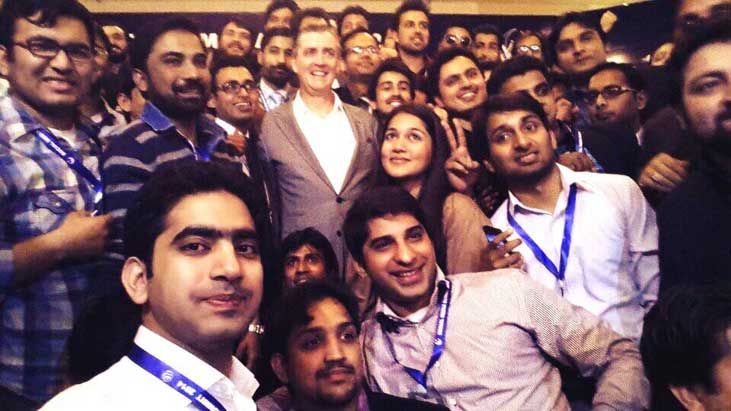 #SMS14 (Social Media Summit) hastag took twitter by storm as people from various sectors of technology and social media gathered to become a part of the biggest Social Media Summit in Pakistan. Over 300 participants gathered in Islamabad to participate in a summit which included big names from Media Industry including Dr. Moeed Pirzada, Nasim Zehra, Faisal Kapadia, Wusutullah Baber and Dr. Shahid Masood.

Social Media Summit was arranged by Pakistan-US Alumni Network and PYF, Progressive Youth Forum, a platform that aims to mobilize the youth of Pakistan for peace-building initiatives and develop their leadership skills. This is the third social media conference; prior to this Social Media Mela was arranged in collaboration with US Consulate. The General Secretary of PYF, Abdullah Dayo played a key role in making the summit a success. Talking to the audience at the opening ceremony, Abdullah stressed that social media has the power to become the true voice of people and can be the platform for change in Pakistan.

Other speakers encouraged the audience to see social media as a tool that can effectively give voice to various parts of the community. Another speaker, Wusatullah Khan said that while online media services were beneficial, the users needed to exercise control and self-regulation.

Panel Discussions held during the two day event focused on using social media for communication of opinion, digital storytelling and a revolutionized way of news reporting. Other topics included the need for entrepreneurship, women empowerment and peace building in Pakistan. The speakers engaged in interesting discussions which centered on a single question: the future of social media in Pakistan. Faisal Kapadia brought up an interesting point by suggesting that the use of local tongue, Urdu, for SM in Pakistan could be the step that would increase its reach to people. He further demonstrated how they had organized a successful campaign to organize money for Thar victims using Twitter.

In conversation with The AppJuice, Mr Usman Latif, a Freelance Marketing Strategist and an attendee at the Social Media Summit 2014 said that the summit was an excellent opportunity for existing users of online social services for networking and finding solutions to common problems. The conference helped provide exposure and highlighted social change and social entrepreneurship. Talking about the recent criticism that the event has received for being organized by US, Usman stressed that regardless of who the organizers were, the event was an excellent idea.

In the recent years, Social Media has gained the attention of many Pakistanis. With more and more people accessing internet on their PCs and Smartphones, it is only a matter of time till Social Media becomes the main playing ground for politicians, journalists and public. However, in other countries it has played a key role in bringing people together for a common cause. It remains to be seen whether people in Pakistan can use the power of social networks to change the landscape of Pakistan and show the world a better, brighter side of the country. 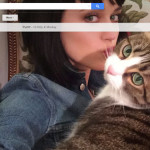