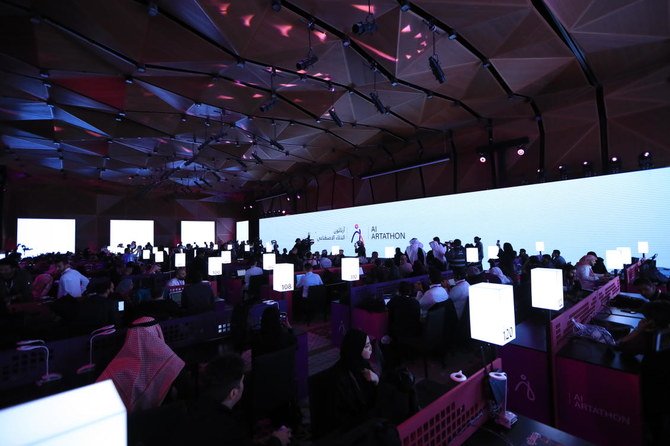 Around three hundred graphic designers, data scientists, and artists from over 50 countries attended the AI competition that was held in Riyadh.

The participants joined the head in the form of a team that consisted of 3 members each. Each team was given 48 hours to finish up the project and to submit for the final evaluation. This is the first time that the competition of such a notion had been conducted in the kingdom of Saudi Arabia.

Hoping his AI project would reach the next level of the Artathon a Syrian electrical engineer and artist Majid Eldeen said that the future holds an amazing combination of artificial intelligence and arts altogether. He said: “Those able to combine both will have a place in the future and will be able to compete well in the job market with new ideas.”
The event was organized by Saudi Data and Artificial Intelligence Authority, the Artathon is considered as the part of the AI Summit of the Kingdom.

Sotam Al Sobaie, Global AI summit supervising committee member said: “AI can be used to help enhance the efficiency of governments and businesses and improve people’s quality of life in general.”
On Saturday the teams who have made it to the next round will be announced at the King Abdullah Financial Center in Riyadh.

“There was a lot of stress, but thank God, the best feeling was knowing we qualified, because we knew our hard work was not in vain, Thank God., and our work was qualified for the second level.” Said by a promising candidate for the event Norah Al Ashmawle.

The top ten teams who will win the competition, their work will be demonstrated in the AI summit.