This new startup has named their product as The Poondi App

We are constantly promoting Pakistani startups and recently we came across a very unusual name, one that had us questioning its entire existence. Its name is Poondi App.

This particular startup has become a victim of what we’d call a case of self-defaming. You may blame it on the cultural setup, or stereotypical thinking but we plainly call it a bad decision. The word poondi in Urdu means ‘to ogle’ and has a very negative connotation attached to it. A startup is not just an idea and a team of people to execute it. You need a good marketing strategy to lift it off the ground and the name of your startup is bound to play a crucial role. The name you choose makes or breaks you. You go for a name that is unique, one that people will remember. In the case of the PoondiApp, people will definitely remember the name but for all the wrong reasons.

As the app becomes more famous, its name would only cause bad publicity. But there tends to be a mindset among people that negative publicity is still publicity. According to a new study from Stanford Graduate School of Business, in some cases negative publicity can increase sales when a product or company is relatively unknown, simply because it stimulates product awareness. We raised this very question with Asher Jamil, the founder of PoondiApp. Here’s what he had to say:

“We picked this particular name because we feel it will be a unique selling point for our app help in marketing it. This name would attract users especially those from the Pakistan and India region. This would help the app to quickly rise up in the app store charts. Moreover, we feel the word poondi isn’t bad in itself but has become so in our culture over time. With our app we are hoping to change that mindset.”

The app, despite being relatively new, was also featured on Kickstarter around January for crowdfunding. The project was, however, cancelled after only 3 backers and $55 in funding.

Whatever the intentions behind the name may be, the app is essentially a personal messenger, friend locator and date finder all in one. PoondiApp’s “one-of-a-kind” feature tells you about crowdy locations and how many girls and boys are present there all in real-time. Only time will tell how this name decision works out for the PoondiApp.

The android version of the app is available for download here. 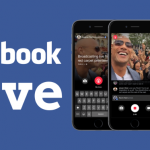 Facebook launches live video streaming for everyone around the world