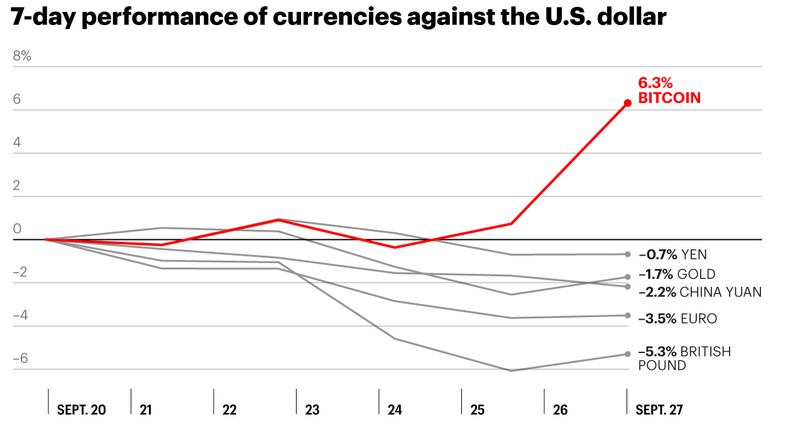 This week the global economy is so bad that currencies such as the British pound and Chinese yuan, are falling, Bitcoin has outperformed, rising 6.3% in the last seven days and coming closer to $20,000 than usual.

As the economy is getting worst these days including fiscal uncertainty and rising inflation, global markets have been severely affected by these macro factors. Bitcoin has often followed financial movements, but its impressive performance over the previous week has surprised some traders and highlighted the unsettling times.

Sven Henrich, the creator of the market research company Northman Trader in his tweet said that “You know we’ve reached a unique time in history when #Bitcoin suddenly is less volatile than fiat currencies”. 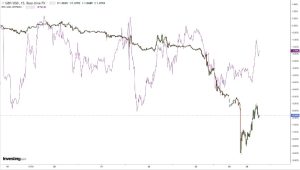 You know we've reached a unique time in history when #Bitcoin suddenly is less volatile than fiat currencies.

According to the international market analysis, the British pound has decreased by more than 5%, and it is now almost at parity with the US dollar over the past week. Analysts point the drop to dissatisfaction with newly appointed Prime Minister Liz Truss’ new policies, as well as the strengthening of the US currency due to rising interest rates.

“This isn’t Bitcoin,” Angela Rayner, a Labor Party member of the United Kingdom’s Parliament, tweeted, accompanied by an image of a quickly decreasing chart “It’s the British pound”

The Tories are recklessly gambling – not with their own money – but all of ours. pic.twitter.com/qTzpzEL4pg

In September, Bitcoin experienced its own choppiness rising at the start of the month before dropping sharply in mid-September on higher-than-expected reports of inflation in the United States.

Tyler Winklevoss, a Crypto entrepreneur tweeted that Bitcoin’s properties “dictate that it should be inversely correlated to inflation,” with its underperformance demonstrating “just how early it is.” Moreover, despite the fact that Bitcoin has been marketed as a hedge against inflation, its connection to US markets illustrates its growing effect on traditional banking.

According to the New York Times’ DealBook, Bitcoin has mostly traded like risky assets such as technology stocks. Its recent increase has been an exception, with Bitcoin marginally in the black for the month while the tech-dominated Nasdaq is down nearly 10%.

The recent upswing is quite interesting for the supporters, especially as traditional assets decline. Bank of England Governor, Andrew Bailey has been particularly critical of the cryptocurrency, as Bitcoin Magazine observed.

In one of the tweets by the Bitcoin Magazine account, “The British pound is down 12% since Bank of England Governor said ‘Be prepared to lose all your money in Bitcoin and crypto” in #Bitcoin and crypto.

The 🇬🇧 British pound is down 12% since Bank of England Governor said "Be prepared to lose all your money" in #Bitcoin and crypto. 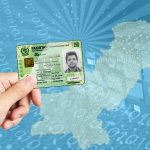