An insight into the Google DevFest 2018 from Islamabad

Google Developers Group pulled off yet another successful event, this time it was the GDG Devfest, the event was held at NUST H-12 last week.

Google Developers Group is a community of enthusiast tech experts and developers which organizes tech events creating buzzwords for those who share a passion for Google’s Developer Technology. This year over 400+ individuals ranging from students to entrepreneurs and professionals attended the event. The event was sponsored by Bentley, GitHub etc. and was event attended by the youngest Microsoft professional, Muhammad Haris.

The theme of the event this year was ‘Digital Wellbeing’ and that how it could be achieved.

The event kicked off with Muhammad Bin Masood welcoming the attendees and explaining what GDG is all about and how GDG is an entire journey in itself rather than just a community. The stage was then presented to Mr. Imran Tanveer, who briefed the audience about the latest updated android version called Android P which includes some exciting features that are going to bring about revolutionary changes to your devices very soon. These features include Gesture Navigation, Wind Down and much more. Mr. Hassan Habib, who is an expert graphics designer from Designist, highlighted technological limitations faced by deaf people and the efforts being made to overcome these.

The event preceded with a session on ‘Artificial Intelligence’, which is currently the talk of town. From Siri, Cortana and Google Now to Automated Cars and Robots, The future of A.I was discussed by technologist Mr. Zain Fuad, who explained how A.I actually works and how Machine Learning will be empowered by innovation through technological means.

Point to ponder: What is Github?. Don’t worry people for those of you unaware of it Mr. Ali Ayub Khan is here to do the job who is official campus ambassador of GitHub in Pakistan. He states that it’s a developing platform that saves time for developers when coding or working on a project with developers from all over the globe. Imagine the possibilities as GitHub eliminates the need of continuous emailing to one person as you work on the project on a singular platform in which all members of that particular project are connected.

Among all the sessions conducted by tech influencers the most awaited one was the session by the founder of LOLZ Studios, Muzammil Hasan Zaidi, on the subject of Google Assistance. Moreover, an interesting and highly informative talk on Google Deep Dream was given by Aqsa Kausar of Codistan. The talks concluded with an enthusiastic Q&A session with the speakers. A number of workshops and codelabs were also conducted on product designing with Angular and Materials led by Shaheer Wasti, Tensorflow by Irum Zahra and Danish Nazir and Firebase by Ilyas Hussain which stirred the audience’s interest to shoot a series of questions in an attempt to clarify their ambiguities and further extract knowledge from them.

The Panel Discussion with Women Techmakers was the tip of the iceberg. The panel included influential women like Maliha Javed Khan (Co-Founder of Easy Insurance), Saadia Khurram (CXO of Jazz), Rabia Babar (Director at Elixir Technologies) and Maham Tariq (Women Techmakers APAC Lead). The panel discussion was moderated by Saad Hamid (CEO Demo & SkillsFirst) and it was centred on ‘women empowerment’ and how the digital age can now provide equal opportunities for both men and women. Furthermore, women techmakers emphasized on interaction and experience as it would play a key role in success and development of the young generation and would bring them in touch with tomorrow.

The event concluded with an amusing activity where students and professionals alike got the opportunity to interact and engage with each other. Thus, creating a pleasant networking environment for all. Well what’s more to an event than the reviews left by its gleeful and satisfied attendees, while to some Devfest’18 was a wonderful motivational experience to others it was an amazing networking platform which boosted their confidence to think outside the box and take that leap. 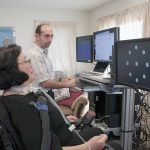