Privacy has been one of Apple’s pillar. The issue has seen Apple take a tough stance from time to time. However, some people have started to take it for granted. Just to remind how much privacy matters, Apple has started an entire marketing campaign on privacy and the latest ad is a part of it.

Currently, Apple has multiple ads running for the iPhone. There is an entire campaign on how the iPhone can adjust the amount of blur applied in the picture.

The ad talks about how much every person values privacy. It masterfully captures different scenarios where we are really sensitive about our privacy. From the routine things like locking doors to changing the topic of discussion when some stranger comes close, we value our privacy a lot.

Apple has a dedicated site explaining how they keep your data safe and secure. These include things like end to end iMessage encryption to their use of differential privacy. Apple had entered into hot waters with the government when they were asked to give backdoor access to suspect’s iPhone.

The campaign started at CES 2019 with Apple’s poster discussing how it valued privacy. While privacy has always been a cornerstone for Apple this is the first time in quite a while that they have started marketing it. A few days ago Apple (UK) made a video talking about how the iPhone was not storing your picture when using FaceID.

Privacy is a fundamental right and unfortunately, we are not talking a lot about it. There is no denying that we need to protect ourselves but given the complexity of the case, it is best handled by the big companies. iPhone might not be your cup of tea but the issue being raised is crucial nonetheless. In a crowd of Android phones where multiple apps have used user data, Apple’s marketing does indeed inspire confidence. More importantly, it’s a narrative that will also encourage other companies to follow a similar course of action. 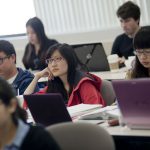 More than 7,000 Pakistani students are studying on scholarships in China