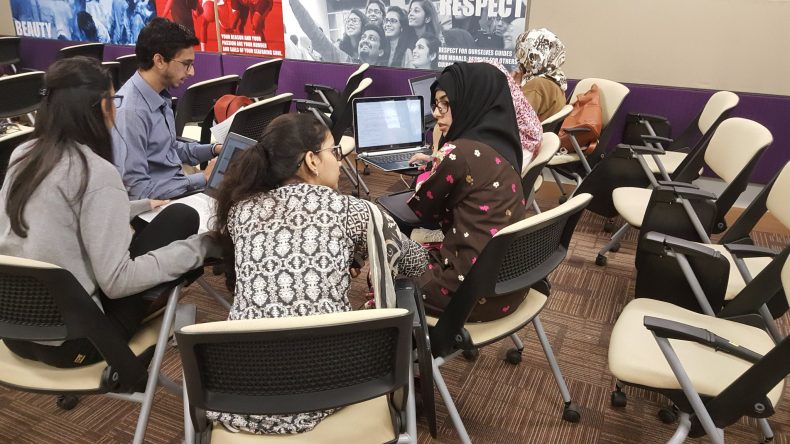 About 40 young women and guests participated in the workshop where they learned about open source coding, honing their technical skills and contributing to civic innovation space. Huda Baig, Code for Pakistan’s Karachi rep, co-organized the event with Syed ObaidUllah, Founding Partner, MarketLytics, a software and data analytics studio, who volunteered with CfP to launch OSDW. Talking about Open Source, Huda said,

“In this context, it refers to software with its source code publicly available for people to modify and share. However, it is not about just making coding publicly available, but also about collaborative participation and transparency.”

Women constitute almost half of Pakistan’s population but the workforce is less than 25 percent. Huma Hamid, a Seattle-based Software Engineer and CfP volunteer and woman behind OSDW idea, said,

“Women work so hard to acquire an education. Women are talented and competent but hold themselves back at an early stage in their lives which results in this huge gender gap in the workforce.”

Obaidullah said that Pakistan has a very low percentage of people contributing to the Open Source Community. Out of that only 11% of open source contributions are by women. He said,

“A lot of women who have studied may not end up working – open source contributions is a great way for women to become active members of the open source and larger tech community,”

“Women underestimate themselves. Technology offers tremendous potential for growth. In Pakistan, there are only 14% women in tech. When women join the economy, not only do they grow, but their families also prosper. For any country’s prosperity, women play a very important role. Platforms like this are critical because they inspire young women to bring their ideas, expand their networks, encourage them, and connect with role models,”

The workshop participants appreciated the efforts of the hosts and usefulness of the workshop.