Federal government to arrange a $158.5 million foreign loan for the establishment of an IT Park in Karachi.

The Federal Government will arrange a foreign loan of Rs. 26.5 billion ($ 158.5 million) to establish an IT Park in Karachi. The total cost is Rs. 31.2 billion, of which the federal government would contribute Rs. 4.72 billion, the official document of the project revealed, according to Business Recorder. The project, which will be completed in 6 years, is being led by the IT ministry to resolve the IT sector issues such as the lack of infrastructure, retention of qualified workforce and increasing international competition.

Software technology parks comprise an essential component of the government’s strategy to develop a knowledge-based economy through value addition, innovation, and technology adoption in line with its Digital Pakistan vision. Similar measures aim to pave the way towards IT zones by setting up purpose-built software technology parks in the country’s major cities to promote efficient and cost-effective collaboration and innovation.

It is being built in addition to another state of the art technology park in the Korangi area by TPL Properties Limited to ensure the acceleration of the IT sector.

Overall, 40 software technology parks are in the works under public-private partnerships. 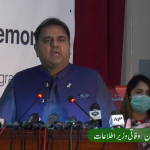