GeekWeek’18 comes to an end 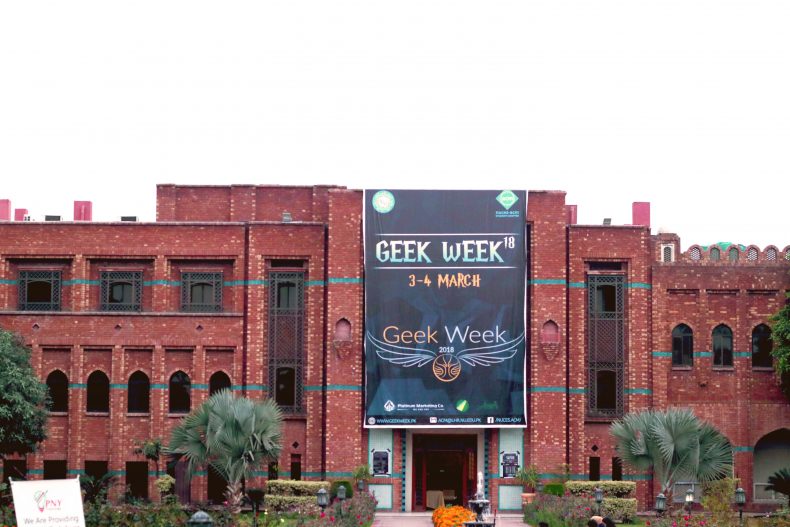 A week to celebrate Geeks in Pakistan happens every year at the National University of Computer and Emerging Sciences. The event circulates around gaming, hacking and the latest prevalent trends in the technology industry of Pakistan.

This year’s edition of GeekWeek, the flagship event of FAST NU’s Association for Computing Machinery (ACM) started on Saturday, the 3rd of March 2018. This was the 7th edition of the event, which lasted for 2 days.

GeekWeek is considered to be one of the biggest university-based Computing and Technology events in the country. This year’s edition had 700 participants, including roughly 100 participants from outside of Lahore who were lodged in FAST NU’s dorms.

The organizing team proudly boasted how this year’s edition provided countless learning opportunities to participants paired with the chance to get feedback from an industry professional and leading academicians (who took on the role of judges). The first day was full of a number of subevents and games planned throughout the day, such as:

One of the most prominent parts of the day was the gaming sessions being held. PC Gamers had the chance to form teams of 4 and take on other teams in Call of Duty 4. Two labs were simultaneously being used to conduct COD matches between the teams on a LAN networking setup. 4 teams from each lab were to proceed to the quarterfinals, making it a total of 8 teams after the initial faceoff.

Other games included FIFA, which was being held on PS4 consoles. The tourney followed a 1v1 format. The victor from each game was placed in the winning bracket while the loser was placed in the losing bracket. The members of the winning and the losing bracket were put against members of their respective bracket. Individuals who lost two games were eliminated from the tournament whereas winners kept on moving to the top of the winning bracket. In the end, the top individuals from each of the brackets fought, aiming to emerge as the victor of the tournament.

Individuals from each team put their critical thinking skills to the test by partaking in a game of chess. One person from each team was put up against an individual from another team. FAST NU’s canteen was used to house the participants. The canteen was full of participants by 1 PM, each of them eagerly looking forward to winning the game and booking their place in the next stage.

Other than the games, the day also consisted of a number of workshops and seminars. A seminar on “How To Sell Yourself” was conducted by Mr. Ahmad Fuad, who is a Corporate Training Specialist and a Certified Change Facilitator. He briefed the attendees about how he started his own business at the age of 17, going against all the odds and the negative thoughts associated with starting a business. He then proceeded to instruct everyone how important self-belief is in the process of pitching yourself or your idea to a third party.

A workshop on Ethical Hacking, Hackathon, was conducted by the Executive Vice President of Digital Security of the Muslim Commercial Bank. He started off the workshop by showcasing his past experience, which ranged from whitehat hacks for local clients to blackhat hacks of international clients. He boasted how he had been hired by a range of companies, including banks based in the UAE, to hack their infrastructure in order to expose their flaws. He gave a step-by-step tutorial on how ethical hacking works. He also told everyone how ethical hacking is sometimes referred to as “penetration testing”, since hackers are paid to “penetrate” the digital infrastructure.

The main highlight of the second day was the talks which were specifically held around career counseling and entrepreneurship in Pakistan. Hafiz Ahmad Awais, Atlas Corp fellow, told the participants of local and international opportunities for Computer Science graduates.

On the other hand, a session on ‘Why Startups Fail?’ was held. It was a fireside chat hosted by Miriam Mehdi, Founder of Kafayak, with the guest, CEO of TechJuice, Fatima Rizwan. The chat focussed on how important it is to take calculated risks in life. While speaking with the audience, Miriam mentioned that,

‘Startup founders too often get emotionally attached to the idea. They need to fail fast, learn and iterate from users’ feedback’.

On the other hand, Fatima mentioned,

‘Running a startup requires discipline in personal and professional life. Startup founders often ignore their health and pull nighters for a long time which impacts their health and they burn out very soon.‘

The event culminated with a closing ceremony, where the participants and winners were awarded shields and cash prizes.

With this, TechJuice signs off as the Official Media Partner of GeekWeek ’18.