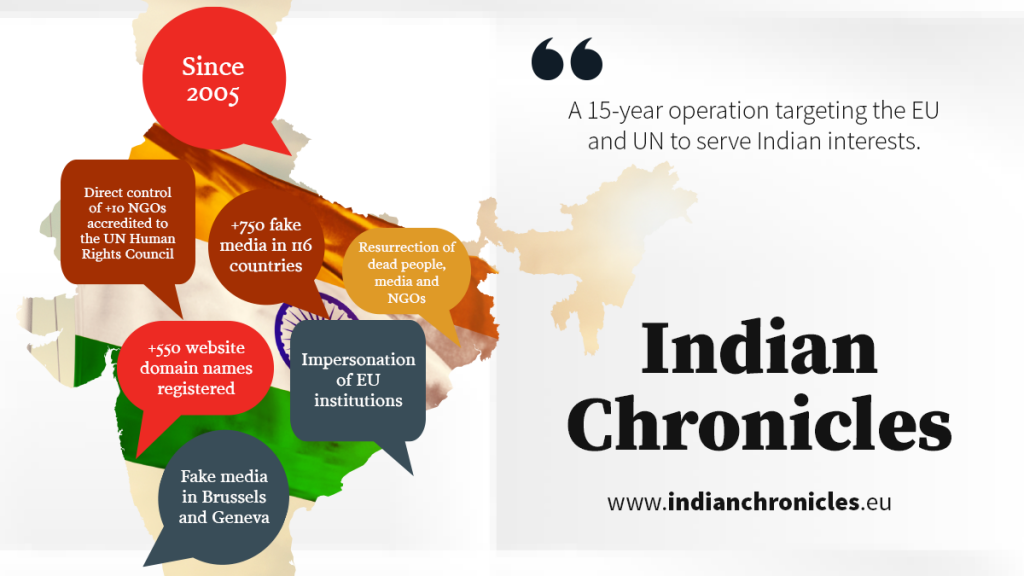 A network of lies

It is the largest network we have exposed,” said Alexandre Alaphilippe, executive director of EU DisinfoLab. “During the last 15 years, and even after being exposed last year, the fact that this network managed to operate so effectively shows the sophistication and the drive of the actors behind Indian Chronicles,” he said.

The operation has been active since 2006, and since then has worked to influence international organizations such as the UN Human Rights Council (UNHRC) and the European Parliament. Indian Chronicles’ main objective has been to “discredit Pakistan internationally” by spreading propaganda against against its arch-rival.

In their report, titled Indian Chronicles, researchers at EU DisinfoLab exposed 265 websites pushing fake news and disinformation in favor of India across 65 countries around the world. The researchers traced the websites back to a holding company called the Srivastava Group (SG) in Delhi. According to the researchers, the SG run operation is active in 119 countries and is aimed at European Parliament and United Nations members. European Parliament members (MEPs) in particular were persuaded to write op eds for a number of publications in the operation’s control. One of the MEPs featured regularly in the investigation, Thierry Mariani from France, has written two op-eds for the EU Chronicle, a fake news outlet part of the Indian Chronicles, according to the BBC. Mr. Mariana was also part of a visit to Indian Occupied Kashmir last year after the illegally imposed lockdown in the region by the BJP. The visit was often cited as a PR stunt by critics.

Lobbying in the UN

The other aspect of the disinformation campaign is influencing think tanks and NGOs working with the UN. The investigation found at least 10 UN-accredited NGOS to have direct links with the Srivastava Group behind Indian Chronicles. Other non-accredited NGOs loyal to India would often take the floor UN on behalf of the accredited NGOs and proceed to speak against Pakistan. Similarly, other NGOs which had no relation to either country would use their time at the UNHRC sessions to speak ill of Pakistan as well.

As reported by the BBC, United Schools International (US), an NGO connected to Srivastava Group, gave up its slot at the UNHRC’s 40th Session in March 2019 to Yoana Barakova, a research analyst at the European Foundation for South Asian Studies (EFSAS). She then used to her time to speak about “atrocities committed by Pakistan”,

Several of these NGOs and think tanks, such as the European Organization for Pakistani Minorities, Baluchistan House and the South Asia Democratic Forum were directly created by the Srivastava Group. They were then charged with “lobbying, organising demonstrations and speaking during press conferences and UN side-events.”

The UN-accredited organizations mentioned earlier, were also resurrected by the group from defunct NGOs to malign Pakistan and advance India’s national agenda at UN forums and meetings. Indian Chronicles took advantage of the previous work these NGOs had done and used their credibility to pursue its own interests. According to the EU DisinfoLab, the previous work of the NGOs was given little significance, with the campaign resurrecting organizations such as the Canners International Permanent Committee (CIPC), an NGO promoting canned food, for its purposes. The NGO is currently being used to send students to the UN to speak about Pakistan, and conduct events on human rights at the UN.

Asian News international, which calls itself “South Asia’s leading multimedia news agency” has been the primary media power behind the organization. It has been used to promote op-eds written on the EU Chronicle as well covering the activities of SG backed NGOs in Geneva. ANI is the biggest television agency in India, and is the only press agency given any heed to NGOs like CIPC.

Who’s behind all of this?

“Essentially, our investigation details how the activities of a fake zombie-NGO and that of a fake specialised media can be repackaged, distorted and amplified by malicious actors to influence or disinform globally, using loopholes in international institutions and online search engines,” wrote EU DisinfoLab on its website.

Many, including managing director of EU DisinfoLab Gary Machado, believe the restrained reactions from the international community after the disinformation network was “clearly managed by Indian stakeholders”.

“Imagine if the same operation was run by China or Russia. How do you think the world would have reacted? Probably with international outrage, leading to public inquiries and probably sanctions,” he said to the BBC.

So far, no sound proof has been found to connect the disinformation spreading network with any state agencies. The researchers at EU DisinfoLab have refrained from “definitively attributing Indian Chronicles to some specific actors such as Indian intelligence services” without a more detailed investigation that proves such a connection. Nevertheless, the organization has a huge amount of resources at its disposal, and seems determined to carry out its objectives of promoting India and slamming Pakistan through illegitimate means. 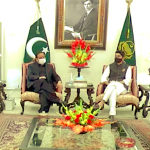