The Internet blackout in Pakistan began at 7 am toward the beginning of the prior day working hours, Major Internet Service Providers, for example, (Pakistan Telecommunication Limited) PTCL, Stormfiber supported by Cybernet, Ufone, and Mobilink Jazz went down.

With almost no prior report or expectation, this came as a shock to people, especially the banking sector since it largely depends on internet services for its functions.

Some internet service providers such as Mobilink Jazz were quick to act and restored their internet services at around 9:15, others such as PTCL, StormFiber, and Nayatel are still down in the majority of areas. This untimely internet outage caused a large number of complaint calls towards ISP’s forcing them to switch off their helplines and stop taking in consumer complaints, some of which are still switched off now.

Stormfiber, Nayatel and PTCL helpline numbers switched off totally. Just Mobilink Jazz turning out appropriately until further notice and different administrations are impacted because of the blackout across the country.

Pakistan Telecommunication Authority Updated via online entertainment, As detailed by PTCL, an issue has been accounted for in information networks among South and North, causing web availability issues. This issue is being researched. PTA is observing the circumstance and further updates will be shared.

Major problems with fiber cables occurred in the areas of Kech, Panjgoor, and Gwadar, where bad weather, flash floods, and heavy rainfall have caused massive fiber cuts that are still being fixed by internet providers. 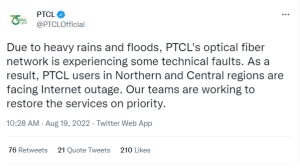 While restoration work is underway, consumers are continuing to be angry at ISP’s, especially PTCL which has become a trending hashtag on Twitter, right after the internet breakdown.

Google Maps Will Soon Roll Out a ‘Vibe Check’ Feature 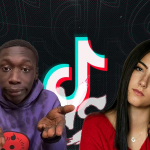