[Video] Interview of Daniyal Shahid, Founder of KiaSceneHai.pk at The TechJuice Show

The TechJuice Show with Daniyal Shahid of KiaSceneHai.Pk by TechJuice

Thanks to one third-year university student who chose to think different and dream big, Kia Scene Hai is not just a conversational saying anymore! In fact, it is much bigger than that and can be most appropriately described as Pakistan’s ultimate city guide that keeps citizens across Karachi, Islamabad and Lahore up to date with the most happening metropolitan scenes.

Having sold his first blog for a hefty sum only as a high-school student, founder of KiaSceneHai.pk, Daniyal Shahid, prides himself on doing things independently and well, unconventionally. While most university graduates are fascinated with the perception of a luxurious indulgence that living and working abroad bring, Daniyal has always been inspired to serve a purpose bigger than self-interest and so chose to take an initiative that would help give back to the country he loves.

At the TechJuice Show held last month we had the opportunity for a candid conversation with Daniyal to learn more about his startup that can be perceived as a major hit in the event management and advertisement industry ever since its launch back in May, 2013. During most of the time that he was enrolled in his university, Daniyal claims to have been frustrated with the idea of being trained to think in conventional terms where typically the focus is on a good academic performance, a well-paid job after graduation and with that, the final reward of a perfect wife. Luckily, that changed with a casual trip where he unexpectedly came across two people he thinks matched his description of “great minds to work with”, Junaid and Ahmad, who would also be his future co-founders harboring the idea behind KiaSceneHai.

Over the years that followed that fateful trip, Daniyal and his co-founders set out to answer one question that is on the minds of all of us: Kia scene hai? And so the group set out to develop a channel that would serve as an event listing platform for organizers and let people know about the latest “scenes”. Users can browse through the website to get details about any event they find worth-attending and can also add events of their own. Such a facility, Daniyal believes, permits organizers to outsource the marketing aspect of an event and primarily focus on the management. The website KiaSceneHai.pk not only catalogs upcoming social and community events but also provides users with the rare facility of online ticketing. With the intention of bringing back the culture of having that opportunity to share and celebrate events and festivals with friends and families, the portal impressively made the first sale in its first month and has been experiencing a steady progress ever since its launch.

Despite an early fallout where his co-founders opted to leave the startup for other promising alternatives, Daniyal chose to believe his mentors and accept the reality that his co-founders deserved to be part of the KiaSceneHai.pk loop for lifetime. Unlike other cases where the team behind the startup breaks up and instead of reminiscing about the fallout with resentment, he considers it to be a great learning experience for him. In fact, he strongly believes that the excitement behind any idea and potential start-up needs to be shared in all possible ways because it’s “not just your baby”. And with that sort of attitude where every individual contributes in terms of facilitating budding startups and businesses, Daniyal hopes that one day the Pakistani tech industry and economy will be on the right track.

Regardless of all the hurdles he has had to put through, and probably even continues to face to date, Daniyal is still leading the enterprise on his own and has great plans to expand operations to other major cities of Pakistan. And so it seems, the story behind KiaSceneHai.pk is still far from over and will continue to be a living proof of how an unconventional combination of innovative thinking, undying faith, and sleepless nights can go a long way. 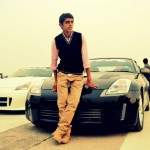