I was first introduced to WeRPlay when I played their game called ‘Run Sheeda Run’, a desi take on the popular game Subway Surfers. I had also read about their close-knit work culture and how they are supportive of women. So I was thoroughly excited on finding that I would get to meet Noor Fatima, a female Game Developer at WeRPlay, because we all know how rare those are.

I arrive at WeRPlay and look around to see a very cool workspace, almost Googlesque. In a matter of five minutes, Noor enters the room. Her feminine aura is enough to convince that it does not always take a stereotypical geeky male with thick glasses hiding behind his PC to develop games. Girls can code too and they can be great game developers.

WeRPlay is one of the few Pakistani tech companies which have made gender equality their top priority. More than 40% of their employees are women, a feat they achieved by realizing early on that hiring more women was essential. Right now most of the lead roles in their Quality Assurance department are held by women. Two very important posts including the Internal and External Manager are also held by highly qualified women.

Noor was born in Saudi Arabia and her whole family uprooted and shifted to Pakistan when she was only five. She excelled at her academics and eventually landed a spot at one of Pakistan’s top universities. But everything wasn’t as breezy. Her first two semesters, in particular, went terribly. She was failing her core programming courses and all seemed lost. “It got so bad that one day a professor actually told me to shift to a non-technical program.”

But instead of crumbling in self-doubt Noor set out to prove him wrong. With the constant support of her parents, she put in a lot of effort to strengthen herself in the core programming subjects. It was a struggle but she vowed never to look at anyone to get her out of a difficult situation. She became a fighter.

The attitude of her male class fellows was also not very encouraging. Most of them were of the opinion that just because someone is a girl, she cannot code. The judgment towards girls always comes based on their gender and never on their potential. It’s almost as sad as it is true.

This disposition of male superiority runs very deep in our society and can be traced to the fact that boys are always allowed to make bold career choices while the path for girls is, more or less, pre-determined for them. While Noor feels she was lucky enough to be encouraged by her parents to do whatever she likes, not all families have this support system.

According to a Hewlett Packard internal report, women are more timid when it comes to applying for a job as compared to men. Women often tend to not apply for a job unless they fulfill 100% of the required criteria. Men, on the other hand, tend to go in even if they meet the criteria by 60%.

When Noor graduated, she decided to embark on a career path. Her parents supported her as she went to give interviews at different software houses. The decision to join WeRPlay was one prompted by her father. Noor recalls, “I think parents look out for their children. And at WeRPlay, my father noticed the fairly welcoming environment and suggested me to join.”

As fate would have it, Noor was selected at WeRPlay after her interview and initially hired as a Quality Assurance Engineer. After 2 months at that post, there was an opening in Game Development and Noor was excited to apply. She was given an initial task of developing a game on her own. She effectively passed that test and was hired as a Game Developer after nailing her interview. A girl who was underestimated by everyone in her class, was now the first and only female game developer at WeRPlay.

Working as the only female game developer with a bunch of guys, Noor has picked up on the traits that guys have which actually help them advance in their careers faster as compared to women. She tells me that more often than not, guys will sign up for a task even if they have no idea how to do it. The panic comes later but they are obviously able to finish the task. Noor thinks that because women are more cautious they are often not offered as challenging roles as compared to men.

“Women should not play safe. This is what I have learnt. So now I’m always on board for a new task. You have to be willing to do something. The solution comes eventually.”

According to the American Sociological Review, companies that have a smaller gender gap tend to make 14% more in sales revenues as opposed to companies with a wider gender gap.

As for young girls who are still indecisive about their future or afraid of picking Computer Science, Noor advises those girls to believe in themselves. She feels happy that more girls are studying Computers now as compared to when she was a student. But at the same time what’s truly saddening is seeing their talent wasted after graduation. According to a survey conducted by P@SHA, women only make up 14% of Pakistan’s IT workforce. At the end of the day, it all boils down to the fact that our offices are not as accommodating of women as they should be. Most IT companies do not pay heed to this topic and eventually play a crucial role in marrying the careers of highly capable women. If steps are taken towards gender equality at workplaces, it would only bear positive results.

Noor feels that there is a lack of powerful role models in tech that young girls can look up to. Everyone needs motivation and it comes best from someone who shares similarities with you and can best empathize. Noor is hopeful that Pakistan’s gender barren tech industry will see more women in the coming years, if more girls study Computers if workplaces introduce women support initiatives, but most importantly if girls are determined to carve a path for themselves.

“Opportunities don’t have to be gender dependent”, Noor says, “unless we let them be.” 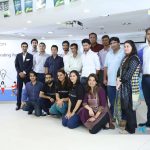