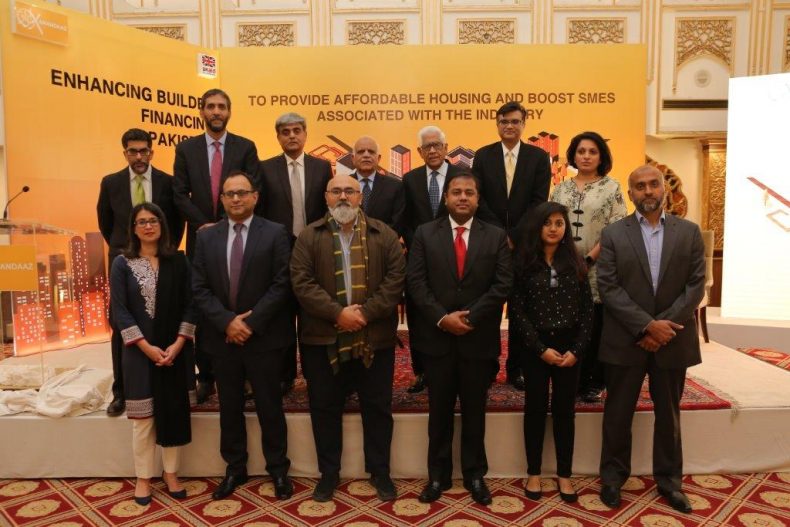 Investment in low-income housing would bring “massive” economic benefits to Pakistan, according to a new study published by Karandaaz Pakistan and funded by the UK Government’s Department for International Development (DFID).

The new study, ‘Enhancing Builder Finance in Pakistan’, was launched at an event in Islamabad at the Marriott hotel.With this study, Karandaaz Pakistan aims to show the wide benefits to Pakistan of building more affordable housing, but also help boost the businesses of Small and Medium Enterprises (SMEs) that work on house building.

The study estimates that the construction of 100,000 more houses each year will lead to economic growth as well as increased employment opportunities. According to the study, Pakistan’s economy will benefit massively if affordable housing were to be increased. To achieve this, improvements should be made to the regulatory environment for builders and banks must be given sufficient incentives for mortgage and builder financing. The study can be accessed from here.

Joanna Reid, the head of the UK’s Department for International Development (DFID) Pakistan, said at the event:“Only the richest of companies can afford to build homes for the richest of people.  Pakistan needs financing mechanisms to ensure everyone can have a roof over their head.”

Speaking at the occasion, CEO Karandaaz, Mr Ali Sarfraz, said: “It is important for such discussions to be given a platform and for players within both the construction and the banking community to come together and engage in a conversation on how the challenges in access to finance, especially for small and medium sized builders and developers, can be resolved. We hope that the study Karandaaz has conducted motivates members from the financial sector to take steps in making available financial products better suited to the needs and asset base of SME builders and developers and thereby catalyzing the availability of affordable housing for everyone in Pakistan.”

The event was well-attended by representatives of the banking and building sectors, along with representatives from the government. MrZaigham Mahmood Rizvi, Chairman Prime Minister’s Task Force on Housing also participated in the event and said: “According to the UN-Habitat, more than half of the humanity now lives in cities, and by 2050 three out of four people will be living in urban areas. This massive urbanization in most of the cities of Asia Pacific is creating challenges in major metropolitans like Mumbai, Calcutta, Karachi, Manila, Dhaka etc. The urban areas, more so major metropolitan cities are facing housing shortages and generating urban slums, illegal habitats and indecent housing. This is adding further to the already existing urban housing shortages in cities, nearly all of which is economically weaker segments of society. The stakeholders of housing, namely developer, planners, the Governments, fiscal and regulatory agencies all are needed to be engaged to address affordable housing challenges, both from its supply-side and finance-side parameters. The supply-side players, mainly the developers/builders need to be engaged for meeting this challenge of affordable housing. In turn, this will boost the economy, and create jobs. Housing and real estate sector is directly linked to about 42 construction materials industries and creates jobs at much higher rate.  I reckon that with the Government’s focus and assistance from partners such as Karandaaz, the growth of SMEs in building and construction sector will bolster the positive impact at the macro level. The state and the private sector should come forward to compliment and support efforts of platforms like Karandaaz.”

Following a presentation by the author, Mr Ali Khizar, a discussion on the topic was held with a panel made up of: Mr Hassan Bukshi, Chairman Association of Builders and Developers (ABAD), Mr Muhammad Raza Sayeed, Head Housing Finance (Islamic) at HBL; MrNavidGoraya, CIO Karandaaz Pakistan; Mr Jawed Aslam, CEO and Founder Ansaar Management Company; and Mr Faisal Murad, Group Head from Housing Building Finance Company (HBFC). The discussion highlighted the need for improvement in the current regulatory environment, and factors such as the increases in property prices, rising costs of construction materials, a lack of documentation within the SME builder community and absence of collateral as deterrents to accessing formal financing.