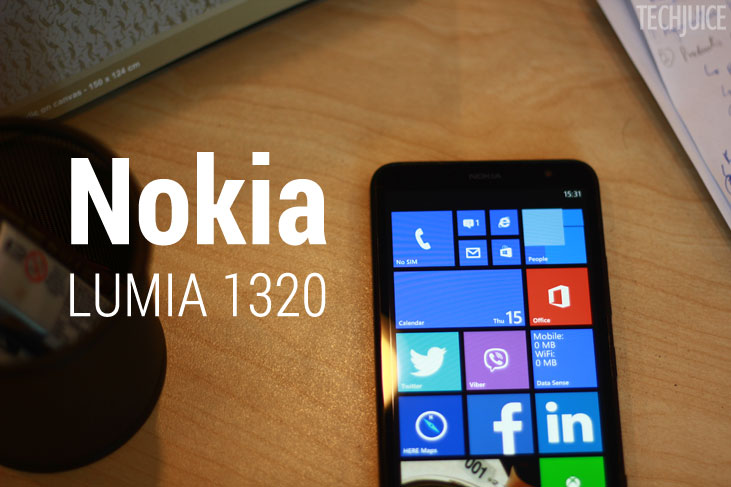 Remember our review of the Nokia Lumia 1520? We loved that phone (read: phablet) hands down. It packed a lot of power in a sturdy looking phone with a huge form factor, yet perfect in almost every sense. But Nokia has always tried to capture all market sectors, by coming up with devices catering to customers with a wide budget range. Starting from the Lumia 520, 620, 720, 820, 920, 1020, and up to their most huge sibling, the Lumia 1520. But there wasn’t a cheaper alternative to the 1520; for those who want a WP8 based phablet, yet at a lower cost. So let’s meet Nokia Lumia 1320, a stripped down version of the Lumia 1520, available for a lower price (with lower specs, that is).

What’s in the box? 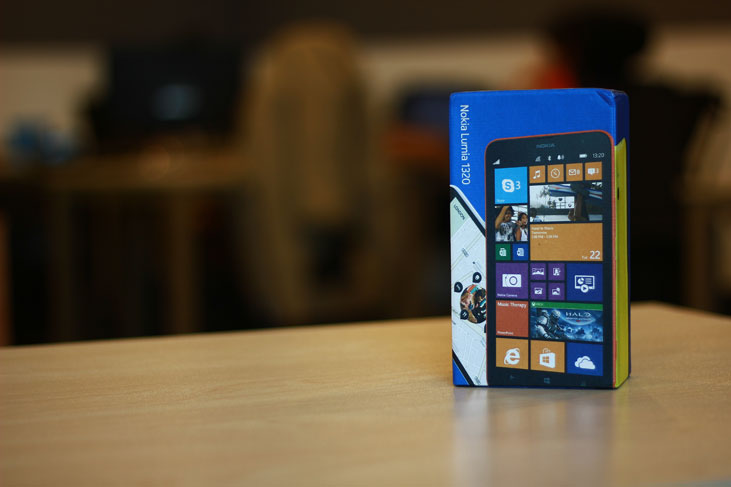 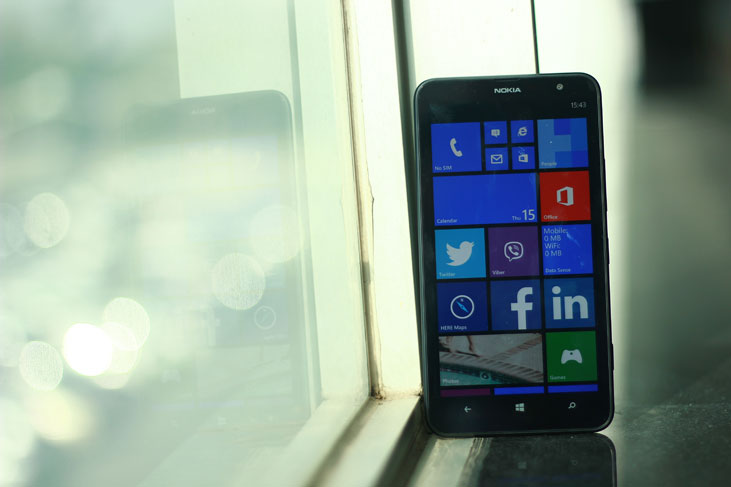 First things first, it’s a phablet, and the screen measures 6” diagonally. Comparing it to its elder sibling, the Lumia 1520, there are some notable design changes. The 1520 had sharp corners, while the ones on 1320 are rounded. For some reason, the sharp corners gave a premium feel to the 1520, but that surely wasn’t intended on this one. Nonetheless, the build quality feels good enough. Holding it in hand surely makes it feel pretty sturdy, yet not as good as a phone with a fully metallic body (like the 1520 and 1020). The Lumia 1320’s rear shell is replaceable. Yet it’s pretty disappointing to see when you pry off the cover, all you see is the solid body of the phone with one opening, which accommodates the micro-SIM and microSD card cleverly in one spot. One simply assumes that if the rear shell comes off, the battery might be replaceable, but that’s not the case here. It’s not such a disappointing fact, but just makes you wonder why Nokia opted for a replaceable cover in the first place- probably because of the notion that all the low-end Nokia phones have replaceable covers? I’d call it a good option for those who might want to give their Lumia 1320 a new look after a while.

One thing that I particularly love about Nokia is how they stick to their standards. Almost every Lumia phone that I’ve used so far had the same configuration of buttons and ports. There are 3 softkeys (back, home, search) at the bottom of the 6” IPS LCD screen, yet covered by the same sheet of Gorilla Glass 3. the keys aren’t backlit, but as long as you’re used to the Lumia and Windows Phone platform, you’ll be easily using them in the dark as well. The top of the phone houses the speaker and the front facing camera. The back of the phone has a pretty small sized 5 megapixel camera with a teeny little LED flash (yet pretty bright and effective), and a sminimal speaker grille near the bottom. The physical buttons are on the right edge (volume rockers, sleep/wake button, and the shutter button), while the left edge is clean. The 3.5mm audio jack is up top, and a micro-USB port can be found at the bottom. Just your typical Lumia-standard construction.

In terms of power, it has a Qualcomm Snapdragon 1.7GHz dual-core processor, and 1GB of RAM. There’s 8GB of internal storage, but thankfully enough, it is expandable via MicroSD card. It runs Windows Phone 8 with as much fluidity as other Lumia devices. 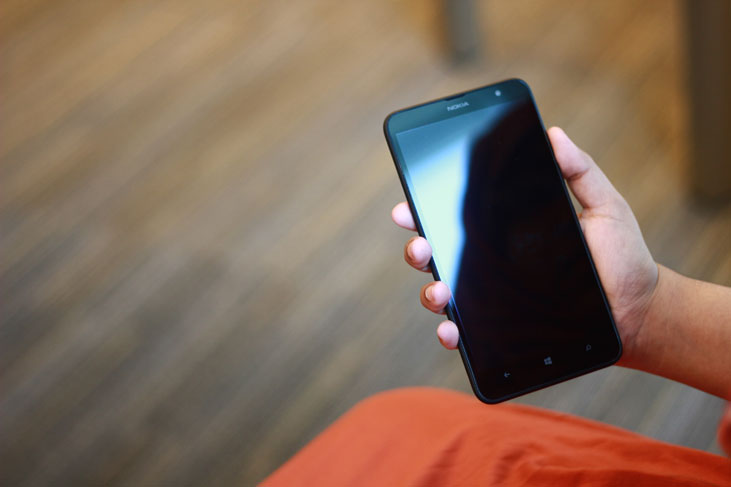 The moment you turn this phone on, you’ll start to see pixels. PIXELS! It’s 2014, and every smartphone manufacturer is trying to ship phones with the highest PPI density possible. The problem is, as you start increasing the screen size, you need to increase the resolution and pixel density as well, otherwise the pixels would easily be discernible. Well that’s pretty much because this phone was meant to be kept on a budget, so it has an HD screen (720p, a resolution of 1280×720), and we probably shouldn’t compare it to the 1520 which has a full HD screen. Yet it houses the same ClearBlack technology which helps with good sunlight readability and good contrast ratio.

There isn’t much to be said about the cameras. The rear camera works beautifully given adequate lighting conditions, but low-light performance certainly suffers as it has a very small sensor with no carl-zeiss optics, like its elder sibling. The flash comes in handy for sure, but don’t expect wonders. It’s a 5 megapixels shooter after all, yet capable of shooting 1080p video. The Nokia Pro Cam application that we loved in the Lumia 1020 and the Lumia 1520 is also missing from this one. We tried Nokia Refocus, and it didn’t work as perfectly as on the higher end Lumia phones. Oh, and there’s also a front camera, but it’s present just because we have phones with front-facing cameras. Don’t expect your selfies to come out to be real awesome with this one; it’s average. 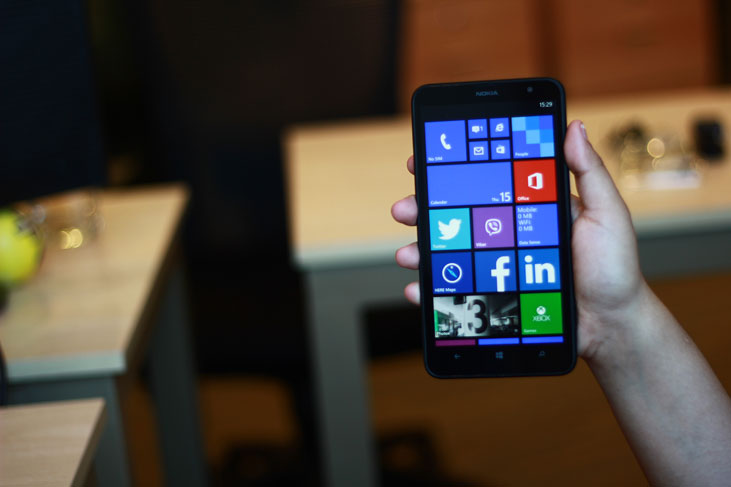 We’ve extensively covered in our review of the Lumia 1520, on how a larger screen size affects the Windows Phone OS; so definitely check that out to read more about WP8 that works in the same way in this phone. But in short, Windows Phone 8 doesn’t really take full advantage of the larger screen other than giving you the ability to add more tiles to the homescreen. Other than that, it looks like a stretched and blown up version of Windows Phone 8. But we hope this might be fixed with the upcoming Windows Phone 8.1 update.

In terms of performance, the Lumia 1320 is pretty much like other Lumia phones, and you definitely wouldn’t want to compare apples with oranges by putting it head to head with an Android phone. Games like Temple Run and others work pretty decent, and the dual-core processor works just fine in this regard. The only thing in which the 1320 might outperform the smaller sized Lumia phones is when it comes to the battery life. It might even be better than the 1520, since the battery is the same (3400 mAh), but it doesn’t have to experience much load due to the dual-core processor (compared to the quad-core processor in the 1520). In our testing, it lasted almost over 2 days on medium usage, gaming, and internet browsing.

Everything in this phone has been cut down, yet it manages to perform just fine. It’s one of the many phones in which you need to consider the price tag before you comment on the performance. Perhaps we have a right to complain, since the price tag is set a bit too high for this one. Around 32,000 PKR for the Lumia 1320 is too much to ask. Lower it by 10K, and I’d accept it with all its flaws. But that’s a relative term and a personal opinion. Some might be content with buying it for the same price tag, since you won’t get a decent phablet in this range. It’s a big yet slightly low-end phone, you definitely need to have a big pocket to put it in- but you probably don’t need a big budget for this one. 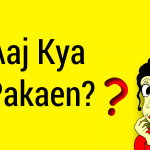