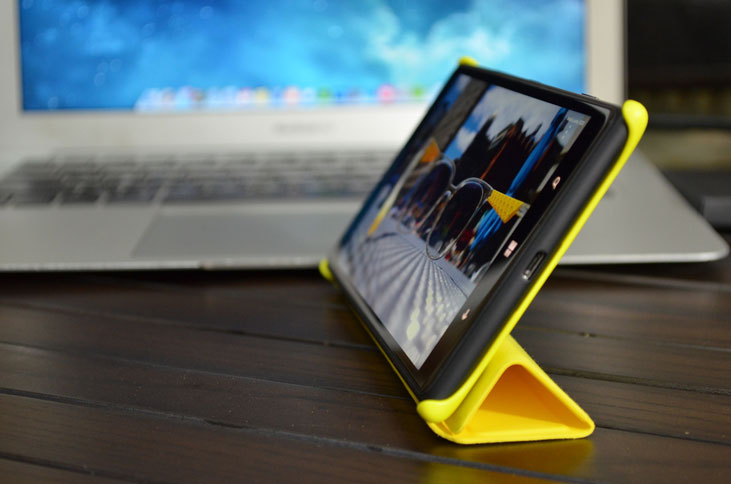 In the beginning, there were phones, also known as cell phones. Then they became smarter and got termed as smartphones. Then came the tablets, which were pretty much like the smartphones, but without the phone part. People did all phone-like things with tablets (taking photos, games, etcetera), and some tablet-specific things that can be better done on a big screen, such as working on documents and web browsing. Except for the fact that they had to carry a smartphone as well, for staying connected. It would be really nice to be able to use the tablet as a phone as well. Of course, holding a 10 inch tablet next to your ear would look really weird (seriously). Hence, phablets (phone-tablet combos) were born, and got pretty popular among people who wanted the have one device for work and cellular connectivity. They’re moderately sized; a bit larger than the average smartphone, and a bit smaller than the average tablet. Out of the 3 major players in the market, we haven’t seen a phablet from Apple so far, some Android based phablets do exist (like the Galaxy Note series), and now Nokia is here with their own phablet- the Nokia Lumia 1520. Check out our exclusive unboxing and hands-on impression video!

What’s in the box

Here’s what we found in the Nokia Lumia 1520 box (see the unboxing video for more!) 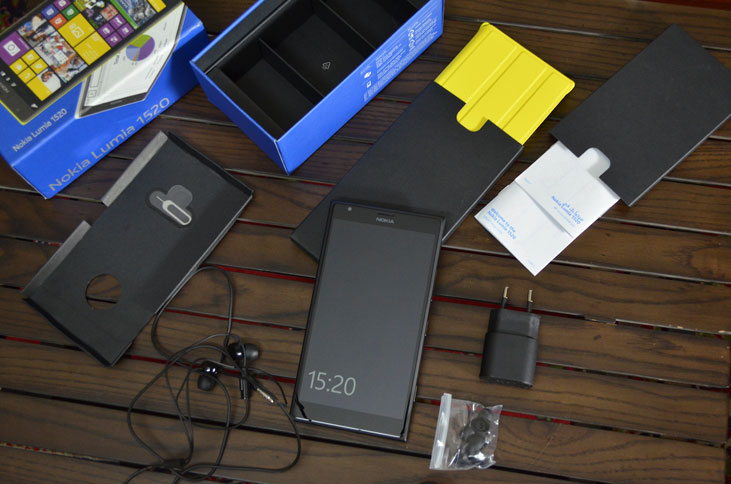 As mentioned, the Nokia Lumia 1520 is a phablet- the hybrid of a phone and tablet, and it would appeal to an audience who specifically likes to use large devices. Keeping a big phone in the pocket is certainly not comfortable; but for those who like it, Lumia 1520 is a good choice. The moment you pick it up, it feels like a quality product, due to its polycarbonate body that feels really good in hand, and looks elegant with the matte finish. It has a 6-inch IPS display with a Full HD resolution (1920×1080) with 367ppi pixel density, and the display is gorgeous. It’s probably the only Lumia device with a 1080p display as of now, and has Gorilla Glass 2 on top of that. It has a Quad-core processor with 2GB of RAM (and it really shows, the device is incredibly snappy!). It also has 32 GB of built-in storage and a microSD card slot for further expansion. The camera on the back is 20 Megapixels, with support for shooting video up to 1080p at 30fps with stereo sound recording, and also has a dual-LED flash. It isn’t as excellent as the Lumia 1020’s super awesome 41 megapixel camera (read our review of the 1020 here), but it hold up pretty well against its sibling. The front camera is a 1.2 megapixel shooter (pretty decent for all you selfie fans out there!). This phablet accommodates a nano SIM, despite its huge size (and that’s ironic, in a very interesting way). Since it is a phablet, we expected it to have a stylus as well, but it doesn’t have one. Other than these things, the Lumia 1520 has all the usual stuff that most common smartphones have these days- including (but not limited to) Bluetooth 4.0, WiFi a/b/g/n/ac with hotspot ability, noise cancellation mic, and NFC etc.

The Lumia 1520 runs Windows Phone 8 with the latest Lumia Black update which includes double tap to wake, and the ‘glance’ feature where you just wave your hand over the phone to turn the screen on. It even works when you pull the phone out of your pocket, and the screen comes on just to show you the time (and any notifications). On first look at the unlocked screen, you can see how the OS makes use of the larger screen, and there are different tile sizes. You can have small, medium, and large tiles just like all other Windows Phone devices, but it’s the number of tiles along the width that make the difference. This essentially means you can have a wide array of tiles on the start screen. With more screen real estate available, the keyboard also scales up, and is easier to type on (I’ve always found it difficult to type on a Lumia’s keyboard, but this one was an exception). But other than that, the OS doesn’t really seem to make effective use of the added screen space (as seen in some Android phablets).

In terms of daily usage, the Nokia Lumia 1520 feels like a solid and sturdy phone (and is also relatively heavier). It isn’t really meant to be used with one hand, unless you have big hands. The camera is pretty decent, and features almost all the controls that the Lumia 1020 had (but the camera result is definitely not that comparable). Watching high quality videos is a superb experience on the Full HD screen, and the protective cover comes in handy, as it doubles as a landscape stand for the phone, so that you can sit back and enjoy the content being played on the screen. The screen is the second most notable feature about this phone- first one being the size.

Overall, the Nokia Lumia 1520 is a perfect device for those looking for a phone-tablet hybrid and for those convenient with its handling. The camera is pretty decent, and the phone itself is fast and snappy. Whether it’s your first experience of using a Lumia device, or even if you’re an existing Lumia user, you won’t be disappointed. The Lumia 1520 lives up to its name (and size), and this too, gets or seal of approval! 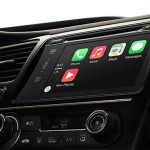 CarPlay brings iOS in the car!