Pakistani e-Founders share their learnings from the Alibaba Fellowship Program 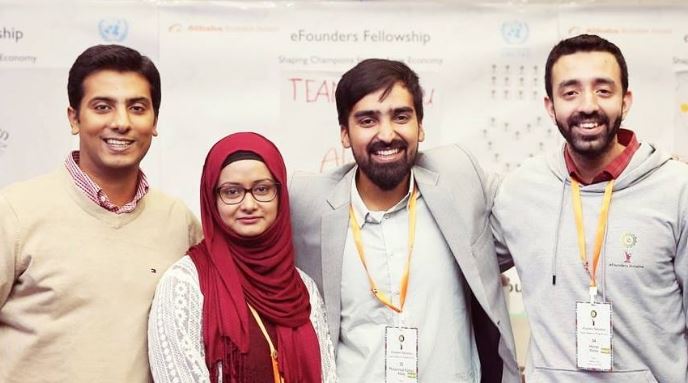 Four e-commerce entrepreneurs from Pakistan recently returned from Alibaba e-Founders Fellowship Program that took place from 24th March to 4th April at the Alibaba Campus in Hang Zhou. A collaboration between United Nations Conference on Trade & Development (UNCTAD) and Alibaba Business School, the 11-day rigorous program essentially aimed at bridging the digital divide by using entrepreneurial skills to the fullest potential. This program has previously been executed for Africa. In the inaugural Asian class this year, Pakistan was the only South Asian country who qualified for the program. Other participating countries included Malaysia, Indonesia, Cambodia, Philippines, and Thailand.

The four e-Founders who made it to the program include:

Three of these Alibaba fellows shared their invigorating experience and learnings at a session hosted by Pakistan E-Commerce Consortium at Institute of Business Administration (IBA) on 12th May. Here is all you need to know about their journey! 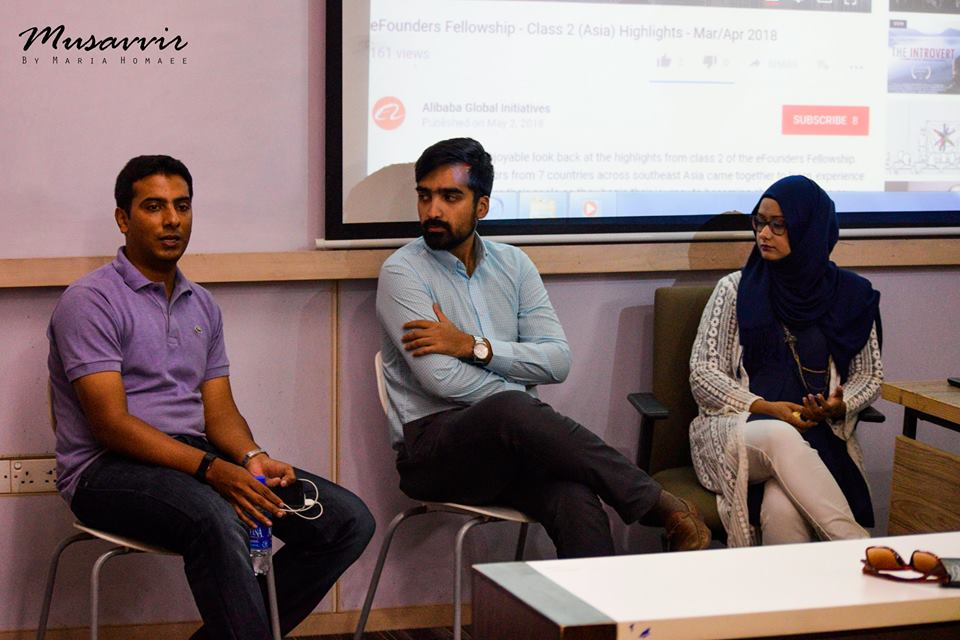 How did the e-Founders make it to the fellowship program?

Jack Ma, Founder and Executive Chairman of Alibaba Group, serves as the UNCTAD Special Adviser for Young Entrepreneurs and Small Business. With an aim to empower 1000 entrepreneurs in developing countries, UNCTAD and Alibaba are working together for inclusive digital transformation and sustainable economic development.

UNCTAD approached the Government of Pakistan to select candidates for the Alibaba e-Founders Fellowship Program, who assigned the responsibility to Ministry of Information Technology & Telecom. Later on, Pakistan Innovation Foundation and Ignite (formerly knows as National ICT R&D Fund) identified local e-commerce startups and conducted the screening. Out of 44 startups, 7 were shortlisted. After an interview round with Yusuf Hussain, CEO of Ignite and Jack Ma, four final candidates were announced.

“We were unaware of such a program until Ignite reached out to us. Yusuf Hussain did not only interview us but groomed us to be prepared for the interview with Jack Ma. He wanted to be convinced himself before he forwarded our names. The whole screening process was extremely transparent. In fact, the four of us had not even met before this fellowship!”

What are their key takeaways from the program?

When the program kickstarted, the fellows were critical and skeptical of Alibaba’s agenda. However, as the fellowship progressed, they realized there is one goal of the company, that is to do business anywhere and everywhere! Their stories do not only indicate how Alibaba is driven to transform digital economy for Asia, but also give an insight into how the impact produced by the company is driving growth and prosperity for underserved communities. Here are some of the key takeaways from the program:

Kidwai believes that digital impact goes beyond fundamental e-commerce. Lives have been changed in China with broadband penetration, significantly in rural areas. The key takeaway from the program was to focus primarily on creating a positive impact and enabling others to be a part of the ecosystem. A company’s focus should not be limited to selling its products and focusing on its profits, but it should encompass growth and prosperity for the region.

Naqvi believes that Pakistani startups are a little over two years behind other Asian startups in terms of progress and maturity. He acknowledges that local startups lack systems, always finding a shortcut. However, Asian startups were adamant to only proceed when they have established a focus system, be it for technology, business operation or finance.

Kidwai was very skeptical when they were asked to attend a two-hour session on culture. Little did he know, it was going to be an eye-opener for him. It motivated him to establish one at his own company while his team members thought it was too dramatic.

Kamran was truly impressed by the Chinese leadership culture which empowers people instead of leading them. Rural parts of the country have been transformed with such leadership. She also appreciated how the families stay close together, and having children at the workplace is not considered unprofessional.

Naqvi also acknowledged that he has been through various incubators and accelerators across Pakistan, however, he did not experience any discourse of establishing a culture, vision or mission.

The e-Founders believe that local founders do not share the journey of the company with their employees. Therefore, it becomes more of an arrangement based on command instead of inspiration. They observed how the employees of Alibaba were committed towards the vision of the company. At Alibaba, integrity is key for everyone. If there is a conflict between two co-founders or employees, it should not have an ill effect on the company.

When Jack Ma was interviewing candidates to expand his team, he observed if the candidate had the potential and the right skills to lead the company. He made smart hiring choices by identifying and focusing on the skill sets required by the company to meet its future vision. He advised the fellows to avoid building companies and teams with friends and family and make decisions based only on expertise.

Local budding entrepreneurs are driven towards making the next Facebook, Amazon or Google. Kidwai wants them to rethink their ideas and make something that does not reinvents the wheel but is patentable and goes beyond business model innovation. Entrepreneurs should really jump into it when they know the ground realities of the industry and their personal challenges too.

On the first Singles’ Day Sale, when Alibaba’s website crashed, they built their own cloud servers which later became Alibaba Cloud. The next year, their payment gateways failed, and thus Ali Pay was launched. Proceeding to another year, their logistics went into troubles and thus Ali Logistics was born. Naqvi mentions here that, Pakistani e-commerce websites are running Black Friday sales for over three years now and the websites crash each year. It happens because we neglect the problems as potential opportunities.

What’s next for Pakistan?

The Pakistani e-Founders participated in the program alongside Asian startups who had already secured Series A funding with over 40 employees working for them. Despite the competition, our entrepreneurs proved their potential. In a business hackathon that was organized towards the end of the program, Buyon.pk secured the first position, whereas Dawai.pk followed at third.

We know that success breeds success. It is essential that the local entrepreneurial ecosystem experiences some successful stories of equity. Being at a nascent stage, it is futile to compare local startups with that of China and India. However, successful exit stories such as Alibaba’s acquisition of Daraz will pave a way for more international and local venture capitalists to invest in Pakistani startups.

Moreover, the fellows believe that Alibaba’s acquisition will not eat small fish of the e-commerce sector of Pakistan, but it will eventually help them through better payments, logistics, and technology services. Just like Alibaba invested in TaoBao and Lazada, it is evident that the e-commerce giant is driven to invest in companies that can drive local impact through inclusion and scalability. Alibaba works on a triangle in which e-Commerce, financial services & logistics occupy each side. With its complete acquisition of Daraz and investment in Telenor Bank, it is now to see which logistics service of Pakistan acquires or raises investment from Alibaba. 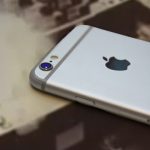