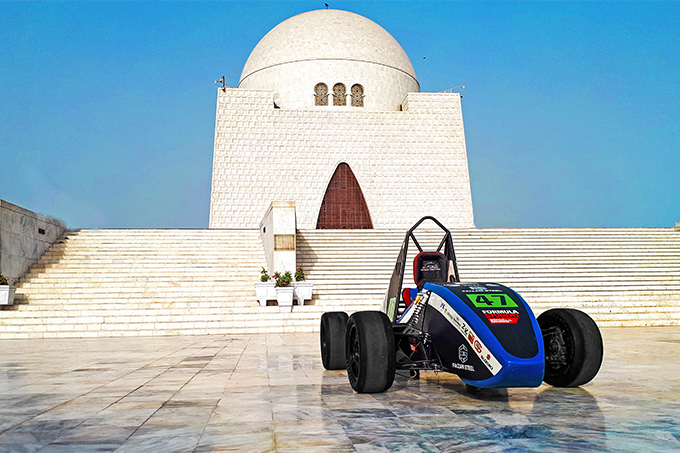 A student team of National University of Science and Technology (NUST) is all set to participate Pakistan’s first formula-styled electric vehicle in Formula Student UK 2018 competition.

With the grave concerns of climate change and ozone depletion, the world is switching from manufacturing internal fuel combustion cars to electric vehicles. Various automobile giants such as Audi, BMW, and General Motors have started production of electric vehicles. Even Tesla motors are founded with the sole purpose to develop electric vehicles.

In the midst of it all, in order to raise awareness about eco-friendly benefits of electric cars over traditional fuel combustion cars, a team of students from Pakistan Navy Engineering College, part of NUST, designed and manufactured Pakistan’s first formula-styled electric car in 2016 which was unveiled by President Mamnoon Hussain.

The team recently finished developing its second electric vehicle which was unveiled by Rector NUST Lieutenant General Naweed Zaman. The vehicle is set to compete in Formula Student UK 2018. Being the largest of its kind, the event will be attended by more than hundred teams from all over the world and will be held at the historic Silverstone Circuit next month from 11th to 15th July 2018.

Earlier, the team participated in FSAE Electric 2016 held in the USA where it stood 18th out of 29 participating teams. The team was awarded People’s Choice Innovation of The Year 2016 by Pakistan Innovation Foundation. However, to this day, FERN is the only Pakistani team that makes electric cars.

The team hopes that introducing such vehicles to the international forums will not only bring the culture of using electric vehicles in Pakistan but will also portray the positive image of the country to the world.

previous
Fortnite makes over $100 million in revenue within 90 days on iOS
random
next
Bitcoin is not for me, CEO Goldman Sachs
Trending Posts