Pakistan is ranked at 123 on the Global Entrepreneurship Index (GEI) 2015 out of 130 countries with GEDI score of 20.1. The bottom position signifies weaknesses in the attitudes and abilities, emphasized by lower scores in human capital, technology absorption, start-up opportunity, start-up skills, risk acceptance, and networking. 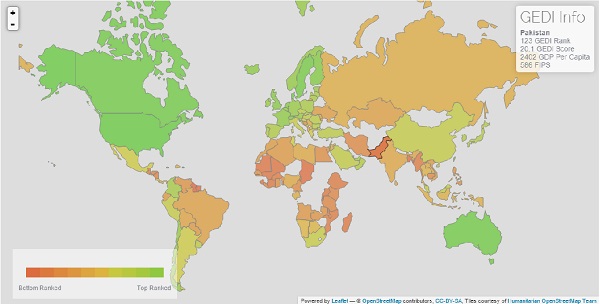 The GEI 2015 also illustrates the percentage of efforts required for 10 point improvement in GEDI score which is up to 17% in case of Pakistan. However, the country is doing better in categories like high growth, product and process innovation, and opportunity perception.

The report also illustrates that Pakistani people are accepting start-ups as a career since only 3% improvement is required in cultural support. The main hindrance in entrepreneurial activity in Pakistan is probably the bureaucratic red tape.

India, on the other hand, has been ranked 104 on global scale and 17 on regional scale with GEDI score of 25.3. Whereas Pakistan ranks 20 on regional scale and has the last place on the favorable conditions for high-potential female entrepreneurial development. Though India is also ranked in the least favorable conditions for females but it is still three places above Pakistan.

The global top performers in Asia pacific region are Taiwan and Singapore while low performers include Indonesia, Pakistan and Bangladesh. Globally, entrepreneurship has progressed for countries like US, UK and Canada from factor driven stage to efficiency stage and finally innovation stage. The report specifies low entrepreneurship performance for EU states, Germany and Japan because of weak economic situation.

Full report can be downloaded here. 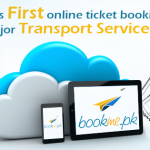 BookMe Achieved Worth 130,000 USD Sales by Selling E-Tickets only