The government of Punjab just launched a new unique web 3.0 portal named the Punjab 3.0. The portal is built to serve web 3.0 contributors such as researchers, scientists, IT industry experts and even international companies working on web 3.0 related projects.

The portal will collect valuable feedback from web 3.0 contributors in Pakistan and all over the world, and will be Pakistan’s first big leap towards web 3.0 technology.

Before performing a successful launch, Punjab Chief Minister (CM) Chaudhry Parvez Elahi held a meeting with the high-powered committee he constituted a while back. Throughout the meeting tech experts alongside CM Punjab discussed the adoption of Web 3.0 in the country.

Apart from people in the government officials, the meeting was also attended by a lot of private sector CEO’s and government body representatives from institutions such as SBP, NBP, BOP, FBR, SECP.

IT Minister Dr. Arslan Khalid while speaking in the meeting said that “Adoption of Web 3.0 in the province will facilitate more interactivity between different users and websites enabling them to access content from multiple sources at the same time, without having to leave the website they are surfing at any point in time”.

Finance Minister Mohsin Leghari said that a successful adoption of web 3.0 in the country will bring economic development to the country and increase GDP.

The PIBT Chairman who was also present at the meeting made some optimistic remarks about web 3.0 and blockchain technology. “Web 3.0 will enable PITB to buy lounges in Metaverse to hold meetings/sign agreements. Citizens would be able to use Metaverse to interact with the government” he said. 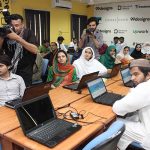