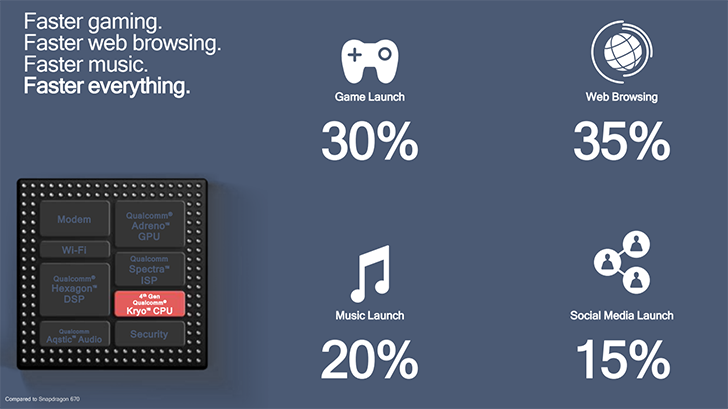 In today’s smartphone industry every major flagship except the Apple and Huawei phones is powered by processors made by one company – Qualcomm. The chip-manufacturing giant is better known for its ‘Snapdragon’ processors that power the majority of the smartphones in the industry. However, Qualcomm has a good news for the budget market with the arrival of its  Snapdragon 675 chipset. The new processor is aimed for upper/mid-range smartphones and focuses on improving the camera, gaming and AI capabilities of the device.

The processor is arguably the industry-first to be manufactured using 11nm processor. According to, Qualcomm’s Vice President of product management, Kedar Kondap, the Snapdragon 675 can be termed as the successor to the Qualcomm Snapdragon 670 processor that was launched in August this year.

The processor has been specifically designed for phones that come under the budget category. The chipset is powered by Adreno 612 GPU and fourth generation Kryo CPU with two performance cores clocked at 2GHz and six efficiency cores at 1.7GHz. The chip is expected to provide 30% faster gaming experience. The chipset has also been optimized for a high frame-rate which is essential for a premium gaming experience. In a noble effort to bring high-end gaming to the mid-range, Qualcomm is also working with games and game engines like Unity and Unreal to optimize the 600-series chipsets.

With the new processor, Qualcomm claims there is 90% fewer stuttering while operating graphic-intensive games such as PUBG, Best NBA, Honor of Kings, Knives Out and more. The processor uses tools including Snapdragon Profiler, Het Compute SDK and Power SDK to run games based on Unreal Engine 4, Unity, Messiah and NeoX. With Aqstic Audio users will also get surround sound audio while gaming. Also claimed is that the games launch 30% faster, 35% for web browsing, 20% for music apps and 15% for social media apps.

With a rising trend for intensive image processing and an increasing number of cameras on a smartphone, the Snapdragon 675 also promises to support better image processing phones that feature a triple camera setup as it includes features like 5x optical zoom, real-time bokeh, super wide angle shots, and 3D face unlock. Furthermore, the chip is equipped for offering high downloading speeds of up to 600Mbps through Qualcomm’s Quick Charge 4+ and the X12 modem

You can expect to see the first smartphones using the 675 processors to arrive in early 2019.