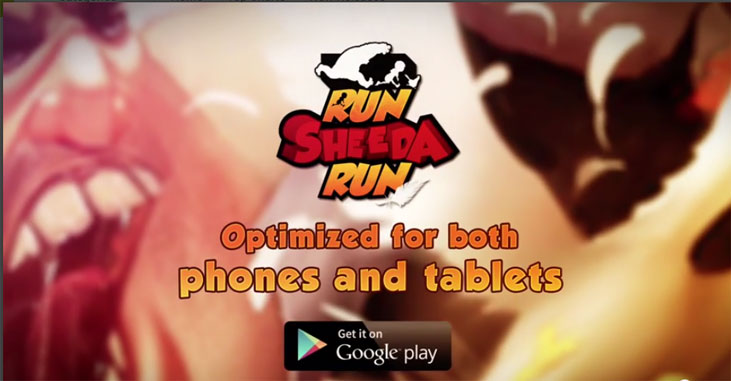 Introduction
Run Sheeda Run is a tricky game to review because there is this huge hype surrounding the game and many beta-testers signed up to test the game-play. People have been talking about this game on social media and it is a hot topic these days, all thanks to the smart marketing team of We.R.Play. In retrospect, after using the game, my opinion has changed. Read on!

About the game
Run Sheeda Run is an endless running game, with a 3D perspective from slightly above and behind Sheeda, a notorious young kid trying to save his chicken from the ugly kasaayi. Swipe the screen left or right to make the turns in the game, slide your finger up the screen to jump, down to slide/limbo under obstacles, and tilt very slightly left and right to move around the path you are on to pick up the coins that are scattered liberally around the game.

Run Sheeda Run is available for free download on Google Play, with the developer’s income coming from in-app purchases. As you collect coins in the game, you can spend these on bonuses and power-ups to assist you in each run in the streets of Lahore. If you would rather not wait and collect the coins, you can buy more from the in-app store, starting at $0.99 for 10,000 coins and for a Box of Balls (10 balls) as well. You can do that by clicking the Shop button from the in-game menu.

Run Sheeda Run has some smooth graphics. You will be swiping to the sides to turn corners, up to jump, and down to slide, a lot. These will be picked up with little slowdown in the on screen action, especially while making a turn to the left side, a glitch present in the beta version and the main app as well.

The power-ups are plenty during the game-play, but as soon as a power up ends, the game hangs for 3 seconds before resuming and by that time the ugly kasaayi has caught Sheeda. During some instances, the SKIP screen kept popping up even when Sheeda running perfectly fine. 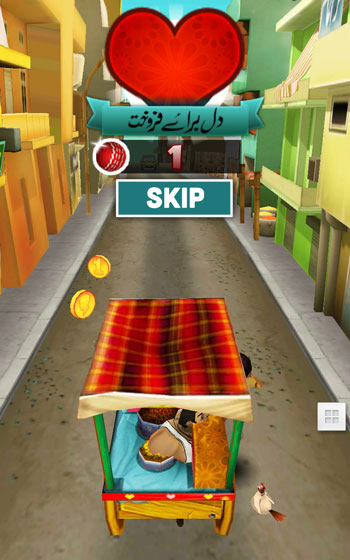 The coins are spread liberally all over the game, but on some occasions, they completely disappear for longer tracks of time.

It is interesting that some stutters in the application that I saw occurred mostly when the app loads graphics to portray a new area in the game for the first time, for e.g. when turning right for the first time; it took a few seconds to load. I presume, it is because of the data being unpacked in the cache memory for the first time. 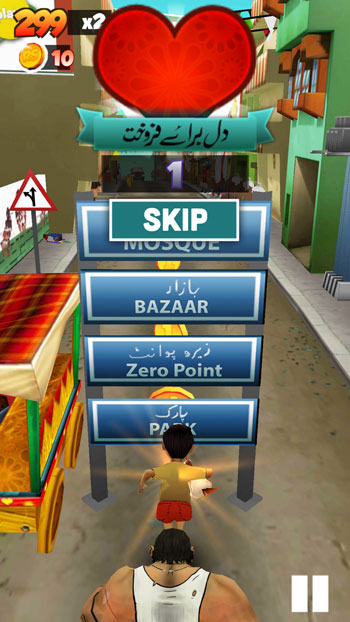 The first time you run the application on your handset, you will have to wait for long time for the game to load properly. It takes a noticeably long time to load the menu. Along with that, there’s a chance that your device will hang quite a number of times, with any incoming texts, emails or notifications causing the game to lag. The screen sometimes goes blank during a notification or the game completely shuts down. We.R.Play needs to issue a patch urgently for this.

When you are playing the game for longer periods, there is a bug of blank screen that appears to annoy the user. Every time I moved on to a good score of above 1300’s, I faced the blank screen issue, with the only option being to press the home key to escape to the main menu.

To be honest, with handsets matching the technical specifications of the game and some Android handsets being technically better at with the hardware, I expected nothing less than a Temple Run type game in terms of Run Sheeda Run. It was dubbed as a Desi Version of an endless running game, but in comparison in terms of presentations, graphics and game-play with the other games, it has been a major disappointment. There was a part of me looking forward to playing the actual game as it was hyped from the start of the year, meaning the developers had quite a lot of time to frame the game before release.

Verdict
The game can be very repetitive, and it is all about user reactions, with no strategy or decision making involved. It is all about the notion “run as far as you can to save your chicken from slaughter,” which unfortunately, the game stutters to deliver. Combined that with consumption of battery (8% consumption for 4mins of game-play), the game definitely needs a new update sooner than later. For me, the game fails to deliver what was promised.

Ease of play: The game is reaction based, with no timing involved, so it takes a while to learn. In addition, as the game progresses, the levels become tough to master.
Consumerism: Additional power-ups may be purchased via in-app store, making the game less competitive. Coins and balls are earned in game, but players can also purchase them with real-world money for as low as $0.99 to $5. 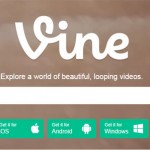 10 Hilarious Pakistani Vines that Will Make you Laugh