SpaceX has become the world’s first private company to launch a crew capsule in space. The capsule named Crew Dragon took off from Cape Canaveral, Florida. There was no human onboard as these part of test flights scheduled for validating the capsule.

The capsule was propelled to orbit within 11 minutes by the Falcon 9. The Falcon 9 then landed back on a drone ship in Atlanta. This marks 35th successful landing for the Falcon 9.

The Crew Dragon was in orbit around earth for some time. It then successfully docked with the International Space Station using the International docking adapter as the interface. The Crew Dragon used an array of sensors and lasers to automatically latch itself with ISS and unload the cargo. The port was developed to facilitate capsules developed by SpaceX and Boeing.

The approach is different from the one used by the Dragon capsule. For the previous version, the crew at ISS would use robotic arms to unload the cargo. The latest version is more autonomous in a sense that it does not require crew members. Crew Dragon has now become the first commercial capsule ever to dock with the ISS.

The first @Commercial_Crew mission arrived at the space station today when the @SpaceX #CrewDragon completed soft capture on the Harmony module at 5:51am ET. #LaunchAmerica https://t.co/Bgcgac0O50 pic.twitter.com/KfNFpHxpGx

Inside the Crew Dragon was a dummy crew member, Ripley. The smart dummy was there to collect data to see what sort of conditions will humans be facing when traveling in the Crew Dragon. There were 4 passenger seats in total.

Astronauts will open the hatch and greet the dummy human. They will then unload all the cargo inside. On Friday, the capsule will head back towards earth and use parachutes to slow it down on its way back.

NASA has relied on Russian expertise after it canceled its Space shuttle program. NASA has resorted to empowering the private spacecraft industry to realize its objectives. This meant pitting SpaceX and Boeing against each other to develop the capsule that NASA will use to send people to space. 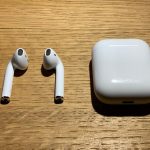 AirPods 2 to wirelessly charge in 15 minutes, Dark Mode to debut in iOS 13.1