TikTok is now one of the World’s most popular applications

The lip-syncing application for mobile devices is now headed towards becoming the World’s most popular applications as the users pass the 6 million mark in the US.

TikTok, the social media platform for sharing lip-synced music videos from China, is now topping the application store charts in the United States. The application has now taken in as much as 6 million users from the US alone and is attracting the celebrities as well. The application crossed Facebook, Instagram, Twitter and others as the downloading spree continued. The application could now be found in the top of most charts. The data was shared by an app intelligence company, SensorTower and was later picked up by The Verge and others.

The application is now joined in by famous celebrities like the famous TV show host Jimmy Fallon and Tony Hawk who is a professional skater. The 6 million users added from the geographical boundary of US adds to the total 500 million of active monthly users from around the globe. 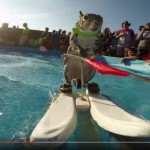