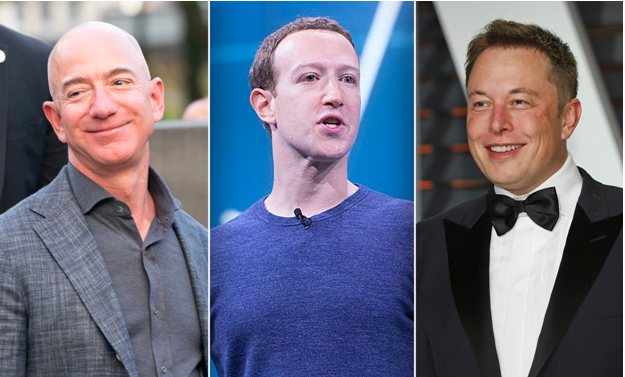 Jeff Bezos’ fortune fell by $9.8 billion, the largest of any billionaire tracked by the Bloomberg Billionaires Index. Elon Musk’s net worth has shrunk by $8.4 billion. Mark Zuckerberg, Larry Page, Sergey Brin, and Steve Ballmer’s fortunes all fell by more than $4 billion, while Warren Buffett and Bill Gates’ fortunes fell by $3.4 billion and $2.8 billion, respectively

As a result of US inflation statistics that was higher than expected, financial markets were roiled on Tuesday, which caused the fortunes of the United States wealthiest billionaires to fall by $93 billion. This was the ninth-worst day loss ever recorded.

The wealth held by Jeff Bezos decreased by $9.8 billion, which was the largest decline among the billionaires monitored by the Bloomberg Billionaires Index. A decrease of $8.4 billion may be seen in Elon Musk’s net worth. Mark Zuckerberg, Larry Page, Sergey Brin, and Steve Ballmer each had their fortunes decrease by more than $4 billion, while Warren Buffett and Bill Gates each saw their fortunes decrease by $3.4 billion and $2.8 billion, respectively. 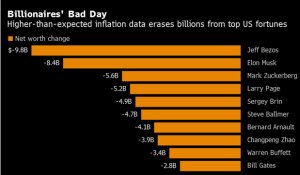 The large daily losses incurred by the billionaires are reflective of the widespread selloff in the US stock market. Investors are betting that consumer price index data that came in higher than expected will cause the Federal Reserve to raise interest rates more aggressively, which has led to the selloff. The S&P 500 saw its worst decrease since June 2020, which was 4.4%, while the tech-heavy Nasdaq 100 Index experienced its largest decline since a drop of more than 12% in March 2020, which was 5.5%.

The stock market and the wealth of billionaires have both had another challenging day today, the latest in a string of such days throughout this year. After an eight-minute speech from the Chair of the Federal Reserve, Jerome Powell, the same group of billionaires in the United States lost $78 billion in a single day. This happened just one month ago. 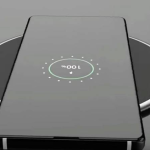 Will Samsung Mobiles Become Button-less And Port-free In Near Future?