We can’t deny the fact that media sharing is one of the most important elements for people using the world’s top messaging app — WhatsApp. However, being able to quickly edit, annotate or edit text captions is the most wanted feature of WhatsApp but until now, the company has not made it available for unknown reasons. And now reports are coming that WhatsApp is looking to get a ‘Quick Edit Media’ shortcut in a future update for the stable version after being disclosed via the beta testing platform.

As you know that previously, users need to visit the specific image (they want to edit) in the gallery, and share it from there as new media, add the specific filters, captions, text, and emojis to the image in order to send to a WhatsApp contact or group chat. As of now, the new media edit feature allows you to “quickly edit images you have already sent” to group chats and individuals within WhatsApp, as spotted by WABetaInfo.

Moreover, the alpha testing of this new feature has revealed that you should not expect that it will give users full control of media editing. The feature will essentially let you directly edit a received image, add annotations and text and forward it to a group chat or individual contact. This feature will help users save a fair bit of time and storage as well, as the newer edited versions are plainly just a modified version of the original image and won’t replace it. Instead, it’s the same picture with some additional information attached to it. 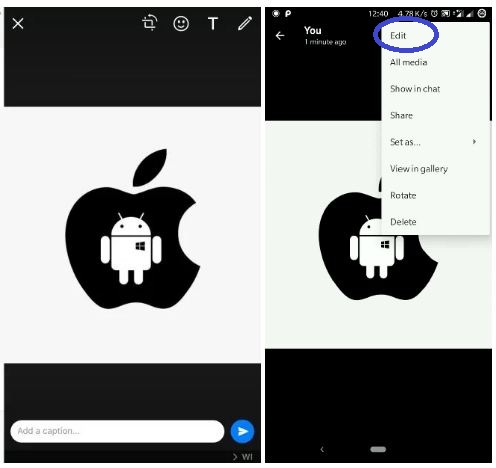 Meanwhile, WABetaInfo has described this feature as “copy this photo and show the Doodle section where you can add text and stickers on the media.” This means that the new updated and edited media within a WhatsApp chat will not disappear or get removed. On the contrary, you will likely see two slightly modified images within the chat. This seems a good option to elaborate or pass comments on your friend’s posted pictures.

It’s not clear at the moment when this feature will be rolling out to Android or iOS users, as it is still under the alpha testing phase.