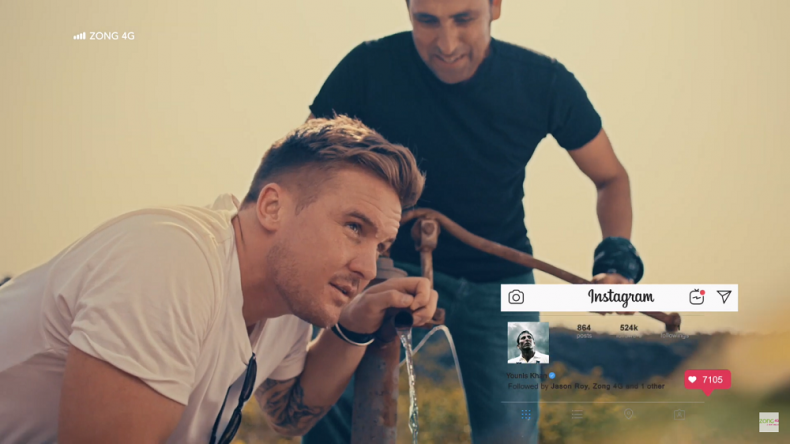 In an attempt to promote both its network and its Pakistani roots, Zong 4G has launched a new campaign called ‘Coverage Leadership’. The associated advertisement is an alluring display of cultural heritage, local hospitality, and warmth, and of course, our love for cricket.
Endorsed by Pakistani cricketing legend Younis Khan and English international cricket player Jason Roy, ‘Coverage Leadership’ hopes to be an eye-opener for the world in terms of what the Pakistani nation can be like at its very best. The TVC emphasizes the country’s traditions of warmth and friendship through its largest and 4G network, Zong.
Roy was invited to visit the country by Zong, and it is his experience journeying through the countryside with none other than Younis Khan, Pakistan’s highest-ever run-scorer in Tests, that is documented in the campaign. Featuring music from the Bieber Girls, a group of two Pakistani sisters who went viral for their rendition of Justin Bieber’s “Baby”, the commercial paints a gloriously heart-warming picture of the nation’s culture, values, and passion for the beautiful game of cricket.
As far as campaigns go, Zong might just have hit it out of the park with this one, as it positions the company as a proud representative of Pakistan.
Speaking on the launch of ‘Coverage Leadership’, a Zong spokesperson said: “At Zong 4G, we take pride in our Pakistani roots, tradition, culture, and our unlimited passion and love for cricket. We would like to thank our two superstars, Younis Khan and Jason Roy, for being the face of our campaign. With the widest 4G network, which is both ubiquitous and offers the most innovative blend of products and services, every single person can rely on Zong 4G to enable their dreams, no matter which part of the country they are in.”
He added that this campaign “reinforces that Zong 4G is strongly present in every city, town, village down to every street corner of Pakistan” thereby bolstering the company’s image as the widest and most advanced network in the country. With more than 13 million 4G subscribers and over 12,000 4G cell sites, Zong 4G is going strong and this campaign can only give them a boost.